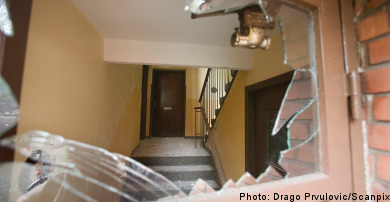 The explosion was strong enough to blow in doors to apartments pn every floor of the entryway.

There were no reports of injuries, but many residents were in a state of shock.

“I was woken up by a loud explosion,” said Johanna Knutsson to the TT news agency.

The bomb was placed just outside her apartment door.

“The door was lying in the hallway and there was debris everywhere and smoke. It was totally unbelievable,” she said.

Police and emergency crews responded to a call which came in around 3.45am Friday morning.

They evacuated the building’s residents and searched throughout the premises.

“It was quite a powerful explosion,” said the fire departments Joakim Martikainent.

He was one of the first to arrive on the scene.

“We don’t know how the person who laid the bomb was able to enter the building. The outer glass door was destroyed. It wasn’t possible to determine whether it was due to the explosion or because someone smashed it in,” he said.

According to Lars Lindwall of the Skåne police department, police have heard from all the residents.

“As far as I know, no one heard or saw anything strange. Neither has anyone been subjected to any threats,” he said to the TT news agency.

Police have not yet decided how they will classify the crime. Technical experts are on the scene and a formal examination is under way.

The evacuees, who were made to wait out the ordeal in a bus, have now been handed over to a crisis center.

“Some of them are really not feeling well. It’s no fun to woken up in the middle of the night by an explosion with this level of force,” said Lindwall.