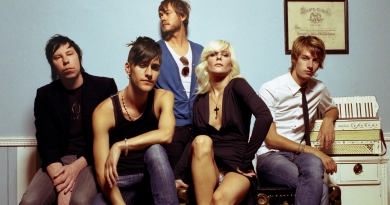 ‘Sweden’s coolest pop star’ plays the ATP festival in Somerset, UK at the special request of US post-rockers Explosions in the Sky, who curate the event. Last year’s release Night Falls Over Kortedala was universally acclaimed by the international music press for its sample-happy, sunny pop songs and Lekman’s baritone vocals. Also at ATP are Broken Social Scene, Iron & Wine and De La Soul.

MySpace: “I abandoned MySpace back in February…I felt it was an insult to everything I loved about pop music. Everything that is unique and personal.”

Anglo-Swedish band Razorlight may be fronted by Londoner Johnny Borrell, but guitarist Björn Ågren and bassist Carl Dalemo both hail from Sweden, and have enjoyed huge success with the band. Since forming in 2002, Razorlight have released two albums, had a number one hit in the UK with ‘America’ and even headlined last summer’s Reading Festival. They play one of their few summer dates at Scotland’s Rockness Festival alongside the View, Fatboy Slim and 2 Many DJs.

Maja Ivarsson, lead singer of the Sounds, cannot be accused of lacking ambition. She once claimed her goal is “to be the best female vocalist around, of at least this century.” She may be best known for her part in the theme music to US film Snakes on a Plane, but is now firmly focused on leading her Swedish New Wave posse in synth-laden pop songs. Serj Tankian, Foo Fighters and Linkin Park join them in Finland.

The pop-punk band from Örebro are still going strong after 15 years, and travel to Paris to play at Mix Up. Millencolin (named after the skateboard trick ‘melancholy’) reached a global audience when their hit ‘No Cigar’ was featured on the soundtrack of video game Tony Hawk’s 2. They remain close to their background by hosting an annual skateboarding competition in their home town. Scratch Perverts, Sick of it all and Yelle are also worth a listen at the festival.

All girl rock band Sahara Hotnights are one of the highlights of the predominantly Swedish Peace & Love Festival, in Borlänge north of Stockholm. Last year the four twentysomething women were named best Swedish band at the Aftonbladet Rockbjörnen awards. Alongside music from the Sex Pistols, Manu Chao and The Wombats at Peace & Love are two ‘theme days,’ where the audience are encouraged to participate in debates and workshops around this year’s theme: Wake up!

Jönköping’s I’m From Barcelona might struggle to all fit on stage at Quartfestivalen in Norway. The band’s 29 members are led by Emanuel Lundgren, who assembled as many friends as he could muster to play some pop songs he had written back in 2005. The music is upbeat, happy (think Polyphonic Spree without the robes,) and a lot of fun. Elsewhere at the festival check out Interpol, Death Cab for Cutie and the Streets.

The Hives bring their brash rock ‘n’ roll to Belgium’s Rock Werchter. Howlin’ Pelle Almqvist and company have been big news around the world since their breakthrough hit ‘Hate To Say I Told You So,’ was rereleased in 2002. Expect matching suits, two minute songs and plenty of showmanship. Also at the festival are Radiohead, Sigur Ros and Neil Young.

Formed out of the ashes of influential punk band Refused, the (International) Noise Conspiracy’s communist leaning punk rock has been described as sounding like the Hives with added politics. Songs such as ‘Capitalism Stole My Virginity’ and ‘Smash It Up’ are always popular among budding revolutionaries, and even those who just want to enjoy some blistering rock ‘n’ roll. Elsewhere at the Swiss festival are the Chemical Brothers, KT Tunstall and Kaiser Chiefs.

The Swedish-Argentine from Gothenburg shot to international fame when his cover of ‘Heartbeats’ (originally by fellow Swedish band The Knife) was used on a Sony advert. He plays one of Europe’s biggest festivals, Spain’s Benicàssim, in July where his stripped down sound and soft melodies will likely prove a hit. My Bloody Valentine, Leonard Cohen and Babyshambles are also on the line-up.

If death metal is more your scene, then the inappropriately named Summer Breeze festival in Germany is for you. Halmstad’s Arch Enemy perform. The band hit fame when lead singer Johan Liiva was axed in favour of German blonde front woman Angela Gossow. Remarkably, petite Miss Gossow possesses a gender defying growl any Slayer fan would be proud to call their own. The festival is not for the faint-hearted, and also features plenty of disturbingly named bands, including As I Lay Dying, 3 Inches of Blood and Born from Pain.