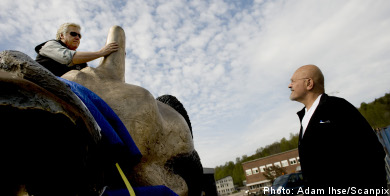 On Tuesday, the nine metre tall Pinocchio statue designed by American pop-artist Jim Dine ended a journey which took it half way around the world from Seattle to the Swedish countryside.

The massive bronze statue is set to be placed in a roundabout near central Borås, symbolically striding in toward the city center.

“The Pinocchio is a metaphor for art,” said Dine to the TT news agency.

Several years ago, Dine was asked by town officials to create a piece of artwork for the city, and came up with the idea for the Pinocchio statue. According to local politicians, Dine has a special interest in the Pinocchio story and in the Swedish town which will soon be home to his latest creation.

But the prospect of having a gigantic Pinocchio serving as a gateway to their city continues to divide Borås residents. In a vote taken last year to approve the statue, 40 councillors voted for the statue, while 28 voted against it, and opinion is still split as to whether the statue belongs in Borås.

According to TT, those critical of the work see it as an example of cultural imperialism and a blot on the city’s reputation. They complain that the town has nothing to do with the marionette made famous by the 1940 Disney film bearing his name.

As it turns out, however, there is a connection—albeit tenuous—between Borås and the character created by Italian author Carlo Collodi.

One of the illustrators of the Disney film was Swede Gustaf Tenggren, who came from nearby Alingsås, and in whose honour the statue is to be dedicated a week from Friday by county governor Lars Bäckström.

The town’s head of culture, Elisabeth Lundgren, emphasized that Borås officials chose the artist, but that it was Dine who ultimately decided on Pinocchio.

“It could have just as easily been a skull or a bathrobe,” she said to TT.

The work of art cost about 9 million kronor ($1.5 million), most of which came from private donations, but which also includes 1 million kronor from the town council to help with erecting the statue.