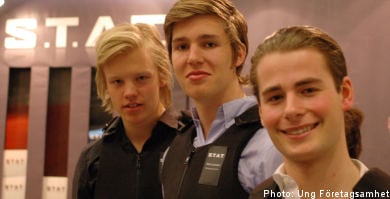 “A little mistake can have major consequences. It’s important to have a condom at the ready when it’s needed. It’s no use if it’s in your jacket pocket,” Nick Larsson told the newspaper.

Larsson is one of the co-founders of S.T.A.T (Sooner Than Already There), a UF-funded company that has so far managed to sell 350 pairs of underpants.

But with a possible retail deal in the pipeline, the partners are optimistic about their product’s future. So much so that they are planning to relaunch S.T.A.T as a real company as soon as they finish school and UF withdraws its funding.

“We’re going to focus on this for a year instead of going to college,” co-founder Michael Simby told Dagens Nyheter.

A number of firms in the Baltic region have contributed to the final product – boxer briefs available in black or white. Each pair comes fully loaded with five condoms supplied by RFSU – the Swedish Association for Sexuality Education.

If all goes according to plan, women can also look forward to condom pockets in their underwear in the near future, as the young men continue their enterprising crusade against venereal disease and unwanted pregnancies.

BUSINESS
H&M reports strong start to the year but braces for tough times ahead
Url copied to clipboard!