The four soldiers were arrested by police in the town of Moundou, around 50 kilometres south of N’Djamena. They were made to surrender their weapons and vehicles and were locked up in a hotel room in Moundou.

A conflict with the authorities is reported to be the reason behind the arrests. According to the Swedish defence forces (Försvarsmakten), the police in Moundou are in dispute with the EU force (Eufor) over the interpretation of the agreement which dictates the force’s movements in the area.

The four soldiers were released at 1.10pm local time (2.10pm Swedish time) after negotiations, according to the Swedish defence forces. Their equipment was returned and all four are safe and sound.

The soldiers will be given the next couple of days for rest and recuperation, medical examinations and de-briefings.

The Swedish defence forces will investigate the events in Moundou and take a decision over whether to take action.

The Swedish-Finnish force in Chad consists of 203 Swedes and 60 Finnish soldiers. In eastern Chad the force will, among other things, shelter refugees fleeing the war-torn region of southern Sudan, Darfur. 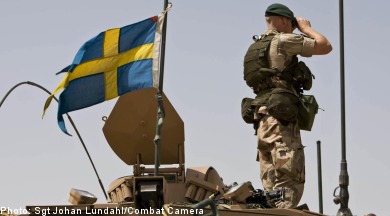