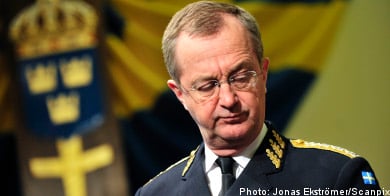 In a proposal featuring an array of downsizing measures submitted by Syrén to the government on Thursday, military operations in Arvidsjaur in northern Sweden will disappear with the dissolution of the city’s Arctic Ranger battalion.

A number of other training units and naval companies are to be shut down as well.

The move comes in response to government pressure to hold down defence spending.

Syrén warned that the military won’t be able to deliver what the government is demanding.

“The Armed Forces are being forced to lower their ambitions when it comes to their ability to repel extensive military operations which threaten Sweden,” said Syrén in a statement.

According to Syrén, Sweden won’t have the protection required if current security conditions deteriorate.

In addition to the training units which the Supreme Commander wants to shut down in Kiruna, Östersund, Gävle, Strängnäs, Eksjö, Skredsvik, Halmstad, Karlskrona and Berga, Syrén has also proposed a number of additional downsizing measures.

The tank training units in Boden and Revinge are to be discontinued, as will the naval companies in Härnösand, Gothenburg, Karlskrona, Malmö and Visby.

The Arvidsjaur ranger battalion’s operations will most likely be moved to the K3 Regiment in Karlsborg, located in the south of Sweden on the shores of Lake Vättern, according to Bjarne Hald, a representative from the Association of Military Officers trade union stationed with the Arvidsjaur battalion.

“They’re thinking of shuttering the army’s ranger battalion and the airborne battalion which trains at K3,” Hald said to the TT news agency.

“They then plan on creating an entirely new concept for the rangers, in which a part of the training will take place at Karlsborg.”

“Now we’re going to request the documents, including the appendices, from the Armed Forces, which show how they calculated when it comes to the downsizing,” said Jerry Johansson, a municipal commissioner from Arvidsjaur.

“It’s not possible to get a more cost effective training than that which is carried out by the ranger battalion here,” he said.

Around 150 people work at the Arvidsjaur ranger battalion, 80 of whom are officers.

Rikard Skiöld, chair of the officers’ trade union at the ranger battalion is extremely critical of Syrén’s proposal, claiming that Armed Forces’ planning is driven by special interests and personal relationships.

“They are watching out for the interests of those with ties to certain branches of the army and parts of the organization with which they have personal ties,” said Skiöld.

The Supreme Commander’s proposal, however, does not single out the air wing which ought to be closed down, according to Kent Löving, a spokesperson at the F17 Air Wing in Kallinge in southern Sweden.

A decision regarding the air wing won’t be made before September 2008.

Regardless of Syrén’s proposals, it is the Riksdag which has the final say on which bases are closed down, the shape of the Armed Forces, and the overall defence budget.

The Commander’s proposal will serve as part of the basis for Defence Minister Sten Tolgfors’s legislative proposal on the military’s future direction and financing, to be submitted later in the year.

In addition to the Supreme Commander’s proposal, the thoughts of the government’s Defence Commission on the issue are due in June.

The government’s so called implementation group has also laid out which equipment projects will be prioritized and which are at risk for being shut down.