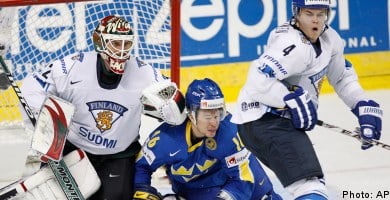 It marked the third consecutive medal for Finland at the Worlds to go with their silver earned last year and a bronze in 2006.

“The biggest thing is the Finns play as a team. They aren’t always the most talented team but they play a team system,” said Finnish coach Doug Shedden.

The game was a rematch of the 2006 Turin Olympic final which Sweden won 4-3.

Finland lost 4-0 to Russia and Sweden lost 5-4 to Canada in Friday’s semi-finals, setting the stage for Sunday’s gold medal game between Russia and Canada.

Niklas Backstrom made 36 saves in goal for Finland, who were outshot 36-13.

The Swedes swarmed the Finnish goal in the second period, outshooting Finland 11-2.

“We had a lot of people watching the tournament back home and this is a big tournament for European countries.

“Obviously we didn’t want to lose to the Swedes.”

One of Backstrom’s best saves came in the second when he slid across his crease to rob Swedish defenceman Daniel Fernholm and then made two follow up saves in the same sequence.

Antti Pihlstrom scored his team-leading fourth and fifth goals and Janne Niskala scored once for Finland, which last played in a bronze medal game against Sweden in 2002.

Ironically, Stefan Liv was the goalie for Sweden in that game replacing starter Tommy Salo.

Liv also got the call here Saturday, replacing Swedish No. 1 Henrik Lundqvist, who struggled in the semi-final loss to Russia Friday and did not dress against Finland.

“It was a strange game. I didn’t face many shots,” Liv said.