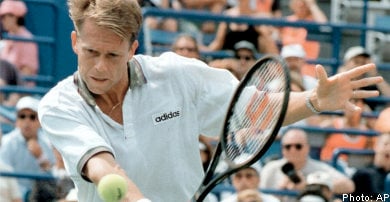 The 42-year-old six-time Grand Slam winner will play in the Trophee Jean-Luc Lagardere in Paris in September and at London’s Royal Albert Hall in London in December.

Sampras, who like Edberg has committed himself to playing two of the tour events this year, is delighted at the prospect of playing the Swede again after a hiatus of 13 years.

“It’s great to hear that Stefan is going to be playing because he’s a great guy and a great player,” said Sampras, who led their personal head-to-head 8-6.

“I’m looking forward to playing against him because I always looked up to him with his serve-volley game, his movement and the attitude that he had.

“I always thought that he was a real gentleman and I’m looking forward to seeing him, talking to him and just seeing how his life is as I haven’t spoken to him for many years.”

Edberg, who never won the French Open, said he was keen to meet up with some of his old rivals on the circuit.

“I retired from the ATP circuit 12 years ago and had often been asked to play on the Tour of Champions, but I had always said ‘no’ in the past,” said Edberg.

“This time I decided to say ‘yes’ and I will play at the events in Paris in September and the Royal Albert Hall in London in December. They are beautiful cities and I am looking forward to seeing and playing against some of my old rivals.”