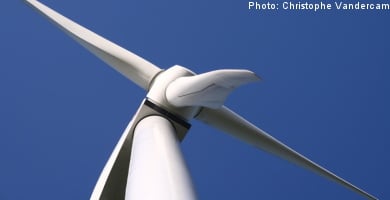 “The government has authorized the building… of a maximum of 108 wind turbines measuring at most 200 metres (656 feet) and with a capacity of 860 megawatts (MW),” the ministry said.

Although there are several giant wind farm projects in the works around the world today, the largest existing offshore wind farm is a 750-MW spread in Texas, while total global offshore wind capacity amounts to just 1,100 MW, according to the Brussels-based Global Wind Energy Council.

The Swedish wind farm, which will be able to produce three terawatt hours (TWH) a year, doubling the country’s current wind power output, will be built in the Kattegatt strait about 30 kilometres off Sweden’s southwestern coast.

The wind farm will cover an area of about 60 square kilometres, the ministry said.

The government decision included numerous requirements for the Swedish company building the farm, Universal Wind Offshore, to ensure the project does not harm the environment, according to the statement.

The company must cooperate with the Swedish Environmental Protection Agency on the placement of each individual wind turbine.

It will also need to carry out an extensive study to determine whether marine life in the area would be affected by the project and would not be permitted to begin construction until county officials had given their blessing, the statement said.

“It is very important that the county government prioritize the wind power project, and we look forward to a speedy process,” Environment Minister Andreas Carlgren told the TT news agency.

Carlgren said he expected the government to present a proposal to parliament early next year.