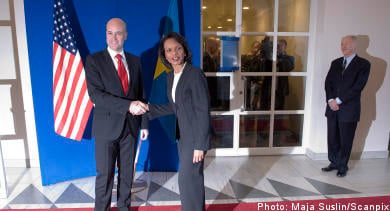 “I have taken up the issue of Iraqi refugees,” Reinfeldt said at a press conference following his meeting with Rice on Wednesday morning.

Rice has said that the United States is prepared to take in between 5,000 and 12,000 refugees from Iraq, Reinfeldt told TT.

Reinfeldt pointed out that Sweden has taken in more than 40,000 refugees from Iraq since 2003, which is more than the US has accepted.

At the morning’s press conference, Rice thanked Sweden for having done so much to help Iraqi refugees.

“The security situation has necessitated many people leaving their homes. Sweden, indeed, has done a great deal and it is very much appreciated, not just by Iraqis but by the United States,” she said.

UN Secretary General Ban Ki-moon didn’t directly address the refuges question but said that Iraq ought to “spend its resources to improve life for its people”.

Ki-moon went on to say that there is now new hope for Iraq.

“Let us be clear about what is at stake. For the first time Iraq has a chance to become fully integrated in the international community.”