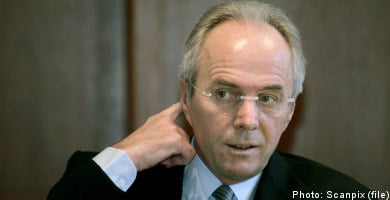 The club, owned by Thai tycoon Thaksin Shinawatra, confirmed the Swede’s long-anticipated departure in a statement on its official website, which claimed that the parting of the ways had been “by mutual consent”.

Thaksin, however, had made it clear before then end of the just-finished English Premier League season that he intended to replace Eriksson, despite what is widely regarded as a very successful first year in charge.

Eriksson, who has been tipped to become Mexico’s next coach, had consistently maintained that his first choice would be to continue his work in Manchester.

But, following the negotiation of a compensation package to cover the three years remaining on his contract, Eriksson said he wished his successor well.

“I have enjoyed my time at Manchester City very much indeed and in particular, I would like to thank the fans, players and staff for their amazing support over the season,” Eriksson told www.mcfc.co.uk.

“I wish the club – and everyone associated with it – much success in the coming years.”

City’s chief executive, Alistair Mackintosh, added: “The Board of Directors and all at Manchester City would like to thank Sven for his efforts and contributions throughout the season and we wish him all the best for the future. Sven remains a friend of the Club.”

Eriksson’s year in charge of City saw a remarkable turnaround in the fortunes of a club that had spent the previous campaign on the edge of the relegation battle.

Astute buys like the Brazilian playmaker Elano and the Bulgarian winger Martin Petrov enabled City to spend over the first half of the season challenging for a place in the top four while playing an attractive brand of football.

With results tailing off in the second half of the campaign, City finally finished the season in ninth place. That was still five places better than the previous season but, despite the bonus of a place in next season’s UEFA Cup via the Fair Play league, Thaksin was not satisfied.

The Thai billionaire is now expected to replace Eriksson from a short-list of high-profile figures that is believed to be topped by Luiz Felipe Scolari, the current manager of Portugal and the man who guided Brazil to World Cup glory in 2002.

Blackburn boss Mark Hughes and ousted Chelsea manager Avram Grant are also seen as a potential candidates for the job of extending the progress made under Eriksson.

It is a task which could be made considerably more difficult if, as has been predicted, the 60-year-old’s departure is followed by an exodous of key players.

The overwhelming majority of City fans had wanted Eriksson to stay and his popularity in the dressing room was underlined last month when the players threatened to boycott their end-of-season tour of Thailand and Hong Kong in a show of support for the under-pressure manager.

Club captain Richard Dunne was central to that move and City’s chances of holding on to the defender, who has been linked with a move to Newcastle, will not have been helped by Eriksson’s exit.

England’s big four will also be encouraged to believe they can start recruiting from City’s outstanding crop of young players, who include the England defender Micah Richards and the highly promising midfielder Michael Johnson.