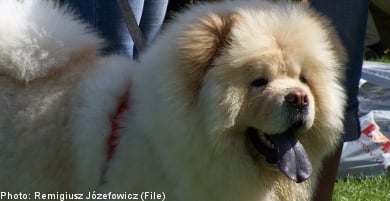 The animals, like their two-legged owners, received a blessing.

In addition to the traditional post-service coffee, doggie treats and bowls of water were also on offer in the warm summer sun.

“The priest spoke eloquently about how much animals give back and that they are never selfish or dishonest,” said Inger Pettersson, who attended the service with her spirited chow-chow Anitos Cinhry, to the Blekinge Läns Tidning newspaper.

Vicar Kjell Erik Pettersson took along his Persian cat Jocke and golden retriever Bimbo, who were said to have listened attentively to their master.

At least until Bimbo became enthusiastic upon discovering an acquaintance among the attendees whom he recognized from his morning walks.

Pettersson hopes to be able to gather both people and animals together again next summer.

“It’s more common in the Catholic church,” the vicar told the newspaper.