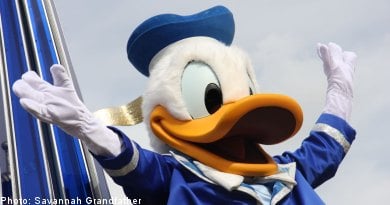 The comic book was first released in September of 1948 and cost 60 öre at the time.

Local media in Halland county report that the magazine belonged to Nore Norold, the late eccentric filmmaker from Laholm on Sweden’s west coast who died in 2004 at the age of 66.

The Hallands Nyhter newspaper reports that Nore’s father was a collector and always purchased two of every toy and comic book he gave to his son.

As an adult, Nore sold off some of his collection, including a second issue of the Kalle Anka comic book series, which fetched 90,000 kronor in the late 1980s.

In May, several first editions from Nore’s sought-after collection of comic books were put up for sale on Tradera. The first edition Kalle Anka had an opening bid price of 25,000 kronor.

When the auction was stopped on Sunday night, the final bid was 105,600 kronor.

However, the price is not a record for the first issue of the first edition of Kalle Anka.

Nine years ago collector Bo Engwall from the Stockholm suburb of Täby purchased a first edition for 170,000 kronor, which made him the owner of two copies.

Nore Norold, often called the ‘Fellini of Laholm’, gained near-cult status in his hometown for his—according to many—awful, low-budget films, which he wrote, directed, and filmed himself.

Altogether Norold made a total of six feature films.