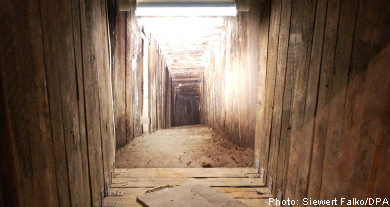 The robbers fled police through an underground tunnel.

An arrest warrant has been issued for the man in Germany for being an accomplice in the remarkable theft, which took place when he was only 19-years-old.

“The man now arrested is suspected of having helped dig the tunnel,” said spokesperson Michael Grunwald with the public prosecutor’s office in Berlin.

During the afternoon of June 27th, 1995, four masked and armed men entered a bank branch in the Zehlendorf neighbourhood of southern Berlin.

They took 16 customers and employees hostage, laid out hand grenades in front of the door, and demanded 17 million Deutsch marks, a car, and a safe get away.

They later received 5.6 million marks, and managed to get the rest from within the bank by breaking open 207 of 400 bank vaults.

What police didn’t know at the time was that there were actually six robbers in the bank. Two more had entered through an underground tunnel.

The thieves then used the tunnel to escape.

When police stormed the bank they found only the entrance to the 170 metre long tunnel. It was later described in an investigation as “a masterpiece of construction”, and included electricity lines, lighting, and fans.

So far six men have been convicted for the bank robbery. Many of them have already served their sentences.

During the spring, the 32-year-old man, who has lived in Sweden for many years, came to the attention of German authorities. A European arrest warrant was issued instructing Swedish authorities to extradite the man to Germany.

A warrant for the man was issued on May 26th, he was arrested a few days later and is now being held by Swedish police.

Lead prosecutor Ulf Forsberg won’t comment more on the suspicions in Germany against the 32-year-old or as to why German police suspect him.