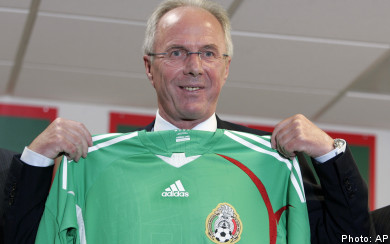 The 60-year-old Swede – who signed a two year contract – arrived in Mexico on Sunday evening just hours before the official announcement of his leaving by mutual consent English Premiership side Manchester City, who he had coached for only one season.

“The decision of the club directors was unanimous,” said Vergara.

Eriksson’s task will be to qualify Mexico for the 2010 World Cup finals in South Africa and to make an impression at them.

“Our target is to reach the 2010 World Cup finals and go further than ever before,” said Eriksson, referring to Mexico’s failure to ever get past the quarter-finals.

For the mean time Mexican Jesus Ramirez will take charge of the side for the friendlies against Argentina on Wednesday, Peru on June 8th, and World Cup qualifiers against minnows Belize, on June 15th and 21st.

Eriksson was ostensibly the third choice for the job with the federation having approached former national boss Aguirre, who preferred to stay at Atletico Madrid and then subsequently Portugal handler Luiz Felipe Scolari, whose wage demands were judged as excessive.

While Eriksson only lasted the one campaign at City – after five years in charge of the England team who he guided to two World Cup quarter-finals and the Euro 2004 last eight – he was very popular with the fans, who believed he had done a good job to revive the ailing fortunes of the club.

Eriksson’s year in charge of City saw a remarkable turnaround in the fortunes of a club that had spent the previous campaign on the edge of the relegation battle.

Astute buys like the Brazilian playmaker Elano and the Bulgarian winger Martin Petrov enabled City to spend over the first half of the season challenging for a place in the top four while playing an attractive brand of football.

With results tailing off in the second half of the campaign, City finally finished the season in ninth place. That was still five places better than the previous season but, despite the bonus of a place in next season’s UEFA Cup via the Fair Play league, billionaire Thai owner Thaksin Shinawatra was not satisfied.

Eriksson’s popularity in the dressing room was underlined last month when the players threatened to boycott their end-of-season tour of Thailand and Hong Kong in a show of support for the under-pressure manager.

Eriksson, who became England’s first ever foreign coach, is the ninth foreigner to coach Mexico.

He enjoyed a mediocre playing career, never rising above the Swedish Second Division before injury ended it, but is rated as a top class coach, especially of club sides.

Aside from the UEFA Cup he also collected national league titles in Sweden, Portugal and Italy as well as the now defunct Cup Winners Cup in 1999.

Sanchez, a former Mexican footballing great, was let go in March for failing to guide Mexico to the Olympics in Beijing.