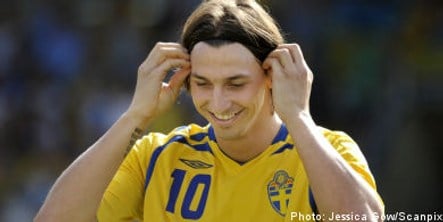 Opinion in Sweden remains divided as to whether striker striker Zlatan Ibrahimovic is a footballing genius or an ineffective enigma.

Going into Euro 2008, fans of the national team will be hoping they get the Ibrahimovic who came off the bench to score a brace and secure Inter Milan’s third successive Serie A title last month.

Fears remain however that they will instead see the striker who failed to score in the qualifiers, where Sweden sneaked in as the second placed team behind Spain, a team they will meet again in their first round group.

The 26-year-old – the son of Bosnian immigrants – has consistently played a starring role for his respective clubs Ajax, Juventus and Inter. But his success rate in the national side has been more intermittent despite rave reviews before major tournaments.

The 2006 World Cup finals were a case in point, as Ibrahimovic singularly failed to

step up to the plate, instead leaving most of the burden to Henrik Larsson. The veteran striker has again been called up at nearly 37 years of age but this time round Ibrahimovic will have to assume greater responsibility responsibility.

In spite of his undoubted talent, until this season Ibrahimovic often went missing in the big matches in the heated atmosphere of Serie A.

But those days are now gone, if former Inter coach Roberto Mancini – who has described him as ‘the phenomenon’ – or assistant coach Sinisa Mihajlovic, are to be believed.

“He (Ibrahimovic) knows everything and is impossible to mark,” says Mihajlovic, who starred for the former Yugoslavia and for Sampdoria and AS Roma in Serie A.

Despite such plaudits Ibrahimovic has not always gelled well with the placid and stable Swedish people even if he was named 2007 sports person of the year ahead of hurdler Susanna Kallur.

One particular incident irked deemed by the Swedes to be particularly irksome and somehow emblematic of his arrogance and star status. This was when the player returned driving a Ferrari to the poor neighbourhood in Malmö where he was brought up.

Ibrahimovic insists though that he is a different person from those days, especially since the birth of his two sons Maximilan and Vincent.

And for every person who does not rate him as a player, there are diehard fans who cite his genius. This is often highlighted by a goal he scored for Ajax in a Dutch league match against NAC Breda in August 2004, where he picked the ball up 40 metres out, dribbled round several opposing players and scored.

Love him or hate him, Ibrahimovic is never dull but Sweden is still waiting for him to replicate in a major competition what he has shown he can do at club level. Should he succeed, then the ‘enigma’ will really have become the ‘genius’.