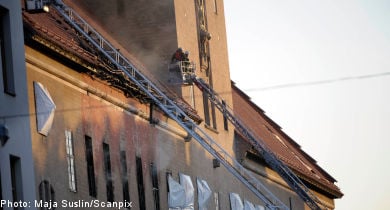 “The situation is relatively stable right now, but the fire could flare up again. We’re trying to limit it,” said Lass Johansson from Stockholm emergency services shortly after 5am on Thursday morning.

The architectural landmark, completed in 1915 and designed by Carl Westman, normally serves as the primary base of operations for the Stockholm District Court.

However, court operations have been moved to other locations since the spring of 2007 when renovations began on the Rådhuset.

Several firefighters had entered the building to examine whether hot embers had spread through joists into other floors in the historical building.

“There are few embers remaining which we’re trying to put out,” said fireman Magnus Wallin to the TT news agency from the scene of the fire.

Operations were winding down throughout the morning, but Wallin portrayed a dramatic picture of the fire from earlier in the night.

“When we got here there was a full blown fire. Five to ten metre high flames were extending from the windows. It looked bad and the fire spread to the attic,” he said.

Wallin estimates that the entire third floor of the left wing is completely destroyed.

The fire broke out around 2am Thursday morning, and within in two hours the situation had become critical.

Up to 70 firefighters from eight stations were called in to help keep the blaze from reaching the building’s middle tower.

Someone called the fire department at twenty minutes past two o’clock and reported that smoke was pouring out of a window on the third floor of the building on Scheelegatan.

Police have blocked off a large area around the Rådhuset.

According to TT, there was no smoke coming from the building’s windows as of 5am.

The fire’s traces can be seen clearly, however, and parts of the roof have been ravaged by the flames. Five windows were destroyed and on the streets below lay piles of broken roofing tiles.