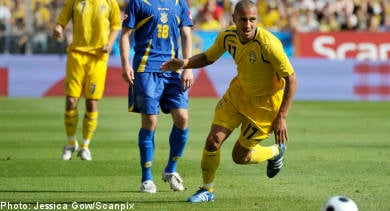 Despite announcing his retirement after the 2006 World Cup, the former Barcelona and Celtic forward, who turns 37 in September, was persuaded to return to the national side by Sweden’s coach Lars Lagerbäck.

With 95 caps and 36 goals to his name, Larsson has been playing for his local team Helsingborgs IF since 2006, with a surprise but successful three-month loan spell at Manchester in 2007.

He is hoping to play in his country’s first Euro 2008 game against titleholders Greece in Salzburg next Tuesday, but Sweden also face Russia and Spain in Group D.

“I am looking forward to the tournament, it’s getting close, our aim is to make the quarter-finals, it will be a difficult group, but we will give our best, everybody is excited,” said Larsson, who made his debut for Sweden in 1993.

“I hope to contribute to the success of the team, I’ll do my best and do whatever is needed.

“The focus is now on the first game, we know Greece has a good squad and a very experienced coach, it will be difficult, we have a lot of respect for them, the first game is always the most important.”

Larsson played up front alongside Inter Milan striker Zlatan Ibrahimovic for the first time since the last World Cup – where they went out to hosts Germany in a match Larsson would prefer to forget as he missed a penalty – in the 1-0 Euro 2008 warm-up defeat to the Ukraine on June 1st.

And the 36-year-old also said he has no plans to hang up his boots and is keeping an open mind about the 2010 World Cup in South Africa, but admitted he was surprised to be back in the national squad.

“I am under contract until November, we will see afterwards, I’ll be available for selection. We will see after, as for the World Cup in 2010, I don’t know,” he said.

“I came back because I had an okay season, we played in Europe against decent teams like Bordeaux and Eindhoven and some attention was focused on me.

“Lars (Lagerbäck) called me the day before the squad was announced, I was very surprised, but very happy.

“We have a good group with experienced players, who have been together since 2000. There is a good feeling in the squad.”