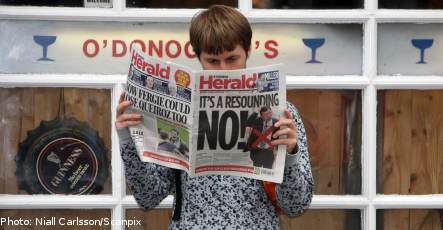 “We must of course respect (the outcome of the Irish referendum), although I deeply regret the result,” Bildt wrote on his blog after official figures showed 53.4 percent of Irish voters had rejected the Lisbon Treaty.

Bildt insisted the outcome in Ireland, the only country to hold a referendum on the text, would not affect Sweden’s ratification process.

The Swedish parliament is scheduled to vote in the autumn on whether to ratify the Lisbon Treaty, designed to replace the EU constitution after it was torpedoed by French and Dutch voters three years ago.

The parliaments in 18 of the EU’s 27 member states have already voted in favour of ratifying the charter.

“We will probably have to wait to draw further conclusions (on what the Irish rejection means for the future of the text) until EU heads of state and government meet in December,” Bildt wrote.

“After all, it is then that the full ratification process will be summed up and the conclusions can be drawn,” he added.

If adopted, the Lisbon Treaty is set to enter force on January 1, 2009.