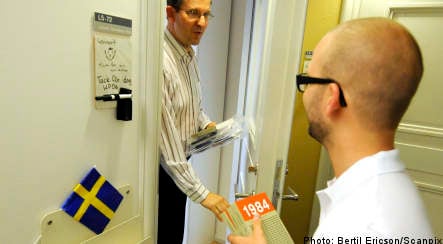 While the bill is unpopular with many members of the governing Alliance’s members of parliament parties, all are under pressure from their party whips to put party before personal preferences and vote in favour of the proposal.

The dissenting votes of four centre-right members of parliaments are all that is required to block the bill.

The three parties of the opposition have agreed to vote against the proposed law, although only the Green Party has rejected the bill outright. Both the Social Democrats and the Left Party have called for amendments to be made before the bill is passed.

Two Centre Party members of parliament, Annie Johansson and Fredrick Federley, have openly criticized the draft legislation. Both said they had decided how they would vote before meeting with their parliamentary group on Monday, though neither would comment on their exact intentions. Group leader Roger Tiefensee said he expected them to follow the party line.

“That is my ambition as group leader,” he told TT.

A meeting of the Centre Party’s parliamentary group continued late into Monday night and was expected to reconvene att 8.30am on Tuesday as MPs continue to grapple with the issue.

But group leader Johan Persson expects her to stick to the party line.

“Yes, I expect people to vote in favour of Liberal Party policy,” he told TT.

Should the government’s proposal for the secret surveillance of email and telephone communication pass into law, the Left Party has called for the current opposition to rip up the legislation if there is a change of government in 2010.

“It gives FRA powers and possibilities for surveillance of the sort that we have never before witnessed in Swedish history,” Left Party leader Lars Ohly told TT.

On Monday night, SVT television new programme Aktuellt revealed, in a report confirmed by FRA director general Ingvar Åkesson, that FRA had been gathering information about Swedes’ telephone and computer communications for the last ten years.

The data concerned the identity of the people communicating with each other rather than the nature of their communication. Åkesson said that the information was screened out after eighteen months.

CRIME
Let police use CCTV without a permit: Sweden
Url copied to clipboard!