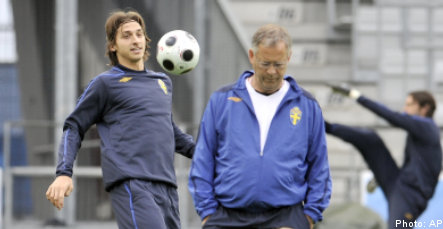 The 59-year-old’s side need just a draw to progress to the last eight where they would meet Holland in a quarter-final in Basel, Switzerland, on Saturday while the Russians have to win.

And despite having an injury doubt over star striker Zlatan Ibrahimovic – who is still struggling with his left knee that has restricted him to playing only a limited amount of time in their first two matches (a 2-0 win over Greece and a 2-1 defeat by Spain) – Lagerbäck is confident with the mass of experience they can get the point they require.

“That is where experience can be important,” said Lagerbäck referring to a side capable of getting the draw.

“When you are playing in the 90th minute and you mustn’t concede a goal it is important to have players that aren’t going to do something crazy and just shut down the match.

“But that is no guarantee. It can work, but it can also fail. Look at the Czechs against the Turks. They tried to close it down at 2-1, but conceded two goals in the last three minutes and went home,” added Lagerbäck, whose own side conceded a late goal to Spain.

Lagerbäck, who has been in sole charge since 2004 having been joint coach with Tommy Söderbergh prior to that, suggested the extra experience of the Swedes with the likes of Freddi Ljungberg, Henrik Larsson and Olof Mellberg, could be the decisive factor over a relatively young Russian outfit.

“That could be the determining factor,” said Lagerbäck.

“When you are a relatively green unit, you can feel the pressure more, even if this tends to dissipate during a match.

“I am happy to have experienced players at my disposal. It is obviously a positive thing.

“But it is difficult to say who will be favourites.

“One is talking about two different type of teams, but of a similar level.

“In my opinion it is 50-50 for the outcome. I hope that our qualities prevail but I do not see us as being clear favourites.

“Russia are a strong team, especially offensively. We should focus on stopping them in that area.”

Lagerbäck, who is not noted for his extravagant tactics, preferring a more conservative approach, refused to admit that the fact his side had had the least amount of shots at goal reflected the accusations of his team being essentially boring and negative.

“It is not because of us, but more the type of matches we have played,” said Lagerback.

“Against Greece, we found a packed defence, very compact, strong in defence

“Then we played one of the best teams in the world (Spain).

“I think that partly explains it. But it is true that to become a world class team, we have to improve, to go up another level.”