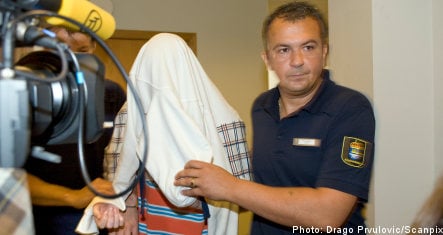 He had admitted to the killing at the start of the day’s proceedings.

The boy was convicted for murder and sentenced to institutional psychiatric care with special provisions preventing doctors from authorizing his release, according to the Malmö District Court following the trial.

“It was a highly anticipated result and in my eyes the most appropriate for my client,” said defence attorney Anders Elison.

Earlier, Elison had criticized the treatment centre where the incident took place.

“There was no need for this to have happened,” he said.

The stabbing took place on May 11th of this year when most of the other boys at the treatment centre were away on an excursion.

During an evening meal, the boy said he wanted to show something to the caregiver and asked her to follow him to a lecture hall. A short time later one of her colleagues found the woman lifeless.

Shortly after the 15-year-old’s murder trial began on Monday, the boy chose to confess to the killing.

He had previously admitted that he held the knife but had denied committing the murder.

Taking the boy’s age into consideration, the district court in Malmö chose to hold the remainder of the day’s proceedings behind closed doors.

Elison criticized the fact that the 15-year-old was able to neglect his medication and that he had the ability to arm himself with a kitchen knife while staying at Tungården.

“I don’t want to anticipate the internal investigation which is under way, but I believe that the treatment centre must have made an error in its procedures,” he said to TT during a break in the trial.

“He was driven by an inner compulsion – he wanted to kill a woman. That it was just this person was a total coincidence, but there was clearly an intent to kill someone. That is also why we choose to admit to the murder conviction,” said Elison.

Earlier psychiatric evaluations have shown that the boy suffers from serious psychic problems and that he is in need of care.

The boy was admitted to the treatment centre after having committed sexual assaults. He suffered from compulsive thoughts and took medicine to counteract the condition.

According to statements made by the 15-year-old to police during questioning, when he neglected to take his medication, his compulsive thoughts grew so strong that he felt forced to kill the 44-year-old female caregiver.