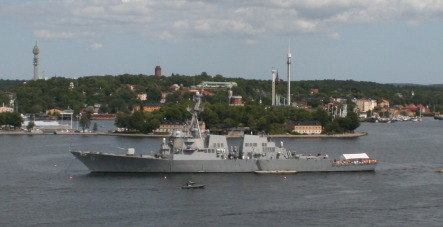 Most of the ship’s 300 crew members have never set foot in Sweden before, and their impression after sailing through Stockholm’s archipelago left them with heightened expectations.

Commanding Officer Cary J. Krause was also struck by the archipelago, not only for its beauty, but also because of the challenge he faced in navigating the 150 metre-long destroyer through the vast collection of islands.

“It was a little bit narrow out there. I studied my charts for three weeks before we arrived,” he said.

“But the experience through the islands was magnificent.”

The Cole has just completed participation in BALTOPS, an annual naval exercise held in the Baltic Sea which has taken place for the last forty years.

The Cole, which is nearing the end of a six month deployment, became synonymous with terror attacks against the United States after suicide bombers ripped a hole in the ship’s hull while it was docked in Yemen in November of 2000.

The sailors who died in the attack are memorialized by seventeen bronze stars in a “Hall of Heroes” near one of the ships main cafeterias.

Commander Krause, who has led the ship for the last year, stressed how the legacy of the Cole attack remains with the ship today.

“A large percentage of this crew volunteered to serve on the Cole, which is not the norm. There is a lot of pride here.”

While the memory of the attacks lingers, the mood on board among the crew members was decidedly relaxed as sailors worked to restock supplies in the summer sun and contemplate how best to enjoy their weekend in Sweden’s capital, which hasn’t hosted a visit from a US warship since 2001.

Besides the current dollar-krona exchange rate, as well as the location of the nearest nightclub, sailors were also interested in having the chance to experience yet another port city.

For more images from the USS Cole, click on The Local’s Gallery.