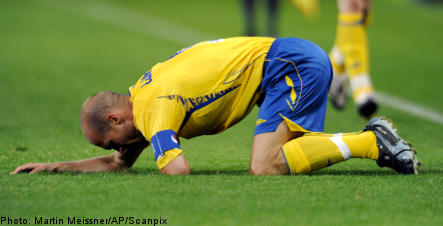 In an emotional letter to fans published on Friday, the 31-year-old former Arsenal midfielder said it was becoming physically too difficult to play for both West Ham and the national team.

Ljungberg played his first match for his country back in 1998. His final game for Sweden was the 2-0 loss to Russia which marked Sweden’s exit from Euro 2008.

“I have decided to concentrate on my football with West Ham. This is where my priority now lies,” Ljungberg said.

He competed in three European championships and two World Cups with the Swedes, before being named captain after the 2006 World Cup.

“The moment has come to let some other player take the number 9 jersey. Sweden has a lot of talented players and I am sure my place will be taken by someone who has the same passion for sport as me,” he added.

“I have played in the Swedish midfield for almost 11 years. I can honestly say that I have loved every match, especially the boundless support that you, the fans, have always given us, the players…”