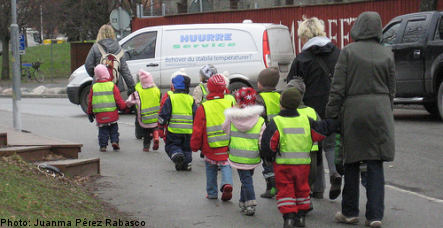 In the past ten years the number of children under five-years-old living in inner-city Stockholm has increased by 4,800 to 19,000. In 1978 there were only 7,500 under-fives living in the inner city. Pia Björklid, a professor at Stockholm University, told the newspaper that changes in attitudes explain the development.

“In the 1970s it was seen as trashy to live in the inner city with children. Today the city is more attractive, it is where things happen, just look at the latte generation. Activities for children are more numerous than for those growing up in the suburbs and there is no longer anything shameful about bringing up children in the inner city.”

Many parents responding to the Svenska Dagbladet survey argued that the convenience of living in the inner city far outweighs the negatives such as crowded parks, exhaust fumes and segregation.

Close proximity to work, shops and restaurants is cited as the universally most popular reason for choosing to live in the inner city.

Björklid warns however that children brought up in the inner city will not gain the same access to the diversity and immigrant cultures that are more prevalent in the suburbs.

“These possibilities are clearly better in the suburbs where there is a greater mix of residential areas.”