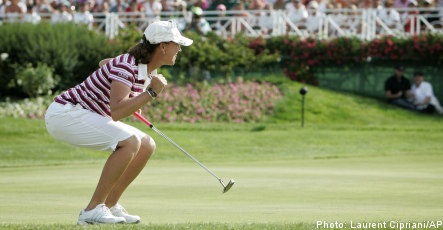 Lundberg, who first one in 2005, fired a closing round 68 at Le Meridien Moscow Country Club to finish at 21 under par.

The round was enough for two-shot victory over Spain’s Jose Manuel Lara with England’s Benn Barham birdieing the last to finish third on 18 under.

Jamie Moul, one off the lead overnight, could only manage a closing 73 to fall back into a tie for sixth.

“This is my favourite place, everything is great here,” said Lundberg, who lost his card in 2006 but returned to the tour via the Challenge Tour last year.

“The worst part is you come here and it feels like I always play well and I should do well, so you put a lot of pressure on yourself and you wonder when you are going to screw up.”

Meanwhile, near the shores of Lake Geneva in France, Alfredsson came out top in a three-way sudden-death play-off to take her third Evian Masters title.

The 43-year-old veteran, who won the inaugural title in 1994 and added a second in 1998, had birdied the final two holes for a final round 67 and forced herself into a play-off on 15 under par 273 against Brazil’s Angela Park and South Korean rookie, Na-Yeon Choi.

The play-off was over the par five 18th and experience proved to be decisive as Alfredsson clinched the $475,000 dollar first prize – the joint richest in the women’s game – with a birdie four at the third extra hole.

Park, who had led going into the final round and closed with a 71, went out when she could only make par at the first extra hole, and 21-year-old Choi missed a six foot birdie putt that would have extended the contest.

Alfredssson two-putted for the winning birdie.

“I’m really getting too old for this,” joked the popular Alfredsson, who has won 19 tournaments worldwide in her 19-year career, but none since the 2003 Longs Drugs Challenge in California.

It was her first win in Europe since the 2001 WPGA Championship of Europe in Wales.

“This tournament has always had a special place in my heart ever since I won the first one. It is the most beautiful place and I feel I have been so lucky to be invited back every year. It’s just great to be a three-time champion.”

World No.1 Lorena Ochoa closed with a 68 and was fifth on 12 under par, while two-time winner Annika Sorenstam, in her final Evian Masters before retirement, also shot 68 for seven under.

“It is sad to know I won’t be back (playing here again),” admitted Sorenstam.

“But I have good memories and I’m looking forward to new challenges.”