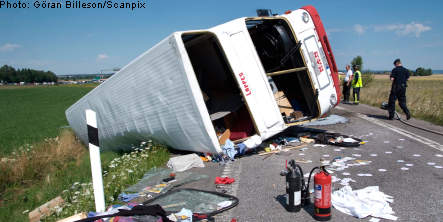 The cause of the accident remained unclear on Monday afternoon.

Police received the alarm at 12pm on Monday that a coach carrying German tourists had crashed by the E4 motorway near Linköping. The coach had been travelling along road 34 from Motala when it left the road and vaulted into a ditch.

The cause of the crash had not been clarified by 3pm.

“Everyone had managed to get out of the coach by the time we arrived at the scene,” said Per Ahlberg at Linköping rescue services to news agency TT.

“They mostly had cuts and a few were suffering from shock,” said Mariana Persson at Östgötaland police to TT.

A new coach was called and collected the tourists that were not injured.

The cause of the accident remained unclear by 3pm. No other vehicle was involved.