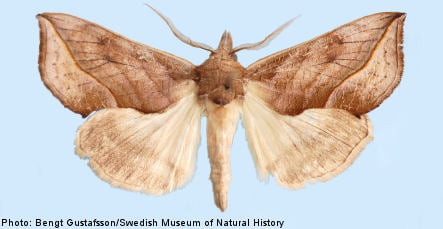 The Scandinavian climate had been considered too cold and harsh for the Calpe vampire moth but regular sightings in Finland in recent years, and now in central Sweden, have indicated that the insect is making itself at home among the flora and fauna of northern European.

There have been regular reports this summer of the little blood-sucking moth near Skutskär north of Stockholm.

“There seems to be quite a large population. The area around the Dalälven is known for attracting these types of species,” said insect researcher Jan-Olof Björklund to Sveriges Radio’s nature program, Naturmorgon.

The Calpe or vampire moth looks like a withered leaf and has a long snout used for sucking blood.

Despite its liking for blood the moth is not thought to pose any danger.

According to experts in Finland, where the moth first appeared in 2000, it only rarely feasts on the blood of humans.