The study has caused alarm among local health officials and politicians, who were previously unaware that such operations took place at all, let alone at tax payer-funded health clinics.

“That there is even a demand for this type of operation is appalling. It is not illegal as long as it is voluntary, but I personally do not believe that girls that approach the healthcare services for a hymen reconstruction do this voluntarily,” said Stockholm’s vice-mayor and social services secretary, Ulf Kristersson of the Moderate Party in a statement

“[It’s] a medical procedure without purpose.”

The findings come from a project launched in the autumn of 2007 by Stockholm’s city council launched to survey the incidence of “honour-related restrictions” on the lives of girls and boys living in the city.

One of these such restrictions is the practice of surgical operations to restore the hymens of young girls to ensure that they bleed following intercourse on their wedding night.

It is a common myth that blood from the breaking of the hymen during sexual intercourse indicates that the woman was a virgin.

Both Christian and Muslim groups in most Middle Eastern countries expect a woman to bleed on her wedding night, Bernardita Nunez told Svenska Dagbladet.

Nunez heads Terrafem, an organization which advises 600 to 1,000 women and young girls every year on matters related to their wedding night expectations.

“There is no research, no findings, and no knowledge about these operations. People put in stitches which the girls believe can rebuild the hymen, but they’re totally wrong,” Nunez told the newspaper.

After the summer, the Social Services Committee (Socialtjänsteförvaltningen) of Stockholm city council will present the report detailing 11 private and public clinics that perform the operation.

The price of the operation varied from 260 kronor ($43) at publicly financed hospitals to 25,000 kronor at private clinics.

The committee’s study also details interviews with 14 women that had been raped.

According to the details from the study reported by the Svenska Dagbladet newspaper, the perpetrators had blackmailed their victims into silence by threatening to reveal the loss of their virginity.

“The young women which have been raped are so pressured that they can see only two paths to take. One is suicide. The other is hopelessness. They are desperate and find nowhere in society that can help them,” wrote project leader detective-inspector Kickis Åhré Älgamo in the report, according to Svenska Dagbladet.

“Is it reasonable that individuals through physical and psychological abuse can force surgical procedures to preserve and maintain a myth?” Älgamo wrote.

The full report from the Social Services Committee will be presented in the beginning of 2009. 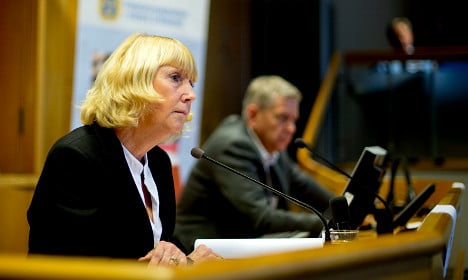