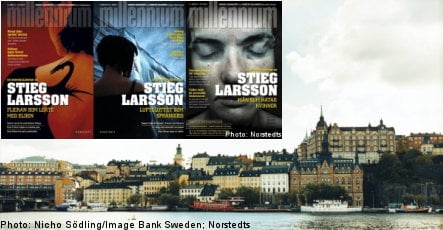 On a recent sun-drenched evening in Stockholm, fans of the bestselling “Millennium” crime trilogy by the late Stieg Larsson met up for a walking tour of the sites featured in the books that have taken Europe by storm.

“Here’s the street where Mikael Blomkvist (the hero of the series) lives in an apartment with a view of the Riddarfjärden canal,” Pia Maria Hallberg, a guide with the Stockholm City Museum, explains in Swedish to the group of 40 people as they stop outside number one on Bellmansgatan street.

“The street was named in honour of poet and composer Carl Michael Bellman who was born in one of these buildings in the 18th century,” she says.

It’s 6:00 pm, and the Stieg Larsson buffs have just begun their tour on Södermalm, one of the many islands that make up the city of Stockholm and which is the scene of much of the intrigue in the trilogy.

Almost eight million copies of the books have been sold since their launch in 2005, including 2.7 million in Sweden — or almost one for every three Swedes in a country of nine million people — and 1.5 million in France. A total of 32 countries have bought the rights to the trilogy.

The first book, “The Girl With The Dragon Tattoo”, was released earlier this year in English, and “The Girl Who Played With Fire” is due for English release in 2009.

“Castles in the Sky”, a working title, is expected in English in 2010.

Taking advantage of the series’ success, the Stockholm City Museum has devised a 90-minute walking tour for devotees of Blomkvist, a disgraced investigative journalist, and Lisbeth Salander, a young hacker who grew up with a brutal ex-Soviet spy for a father.

“I read the three books in three weeks. I couldn’t stop. But I didn’t know exactly where the streets were,” says Corinne Eldh, a 22-year-old graphic artist on the tour.

She wanted to see the places with her own eyes, peeking into the restaurants and cafes named in the books, and walk the streets that inspired Larsson, a journalist who died of a heart attack at the age of 50 in 2004, before he could experience the wild success of his trilogy.

‘It has exceeded all our expectations’

“We’re on Götgatan street, which used to be the only road on and off the island of Södermalm,” says Hallberg, adding:

“There, above the Greenpeace sign, are the offices of Millennium, the news magazine Blomkvist works for.”

Hallberg, who designed the tour herself, says the trilogy is a great pretext to discover the streets of the Swedish capital.

“We started this tour on July 8. There will be a total of six tours this summer, until September, and the tickets, which cost 80 kronor ($13), are already sold out,” she says.

Given the trilogy’s success abroad, the museum also plans to offer the tours in English and French.

According to Magdalena Hedlund, copyright director at Swedish publishing house Norstedts which released the first book in August 2005, the walking tour just goes to show what a “phenomenon” Millennium has become.

“There are a very few books that are so popular that anyone would want to do a city tour around the sites from the book and to know more about the places where the intrigue takes place,” she says.

The series has also been a huge hit in France.

“Many of us thought it would be a success, but it has exceeded all of our expectations,” said Guillaume Charlet, a spokesman at French publisher Actes Sud which released the first book in June 2006.

He attributed the success to the atypical characters and the fact that the books are an easy read.

“Stieg Larsson knew how to create very good characters with a ton of details. Lisbeth is really original, and at the same time she moves us,” says Johan Jernberg, a 37-year-old sailor from the Stockholm suburb of Farsta.

“I hate culture, I never go inside a museum. But my wife gave me this ticket and it’s a good way of learning about Stockholm’s history and having a good time,” he says.

At 7:30 pm, the visit ends at Kvarnen, a historic working class beer hall on Södermalm that is Lisbeth Salander’s favourite watering hole.

The die-hard fans turn home, with their thoughts already turning to the film version of the trilogy, due out next year in Sweden.