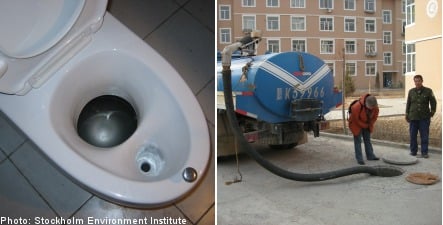 Inner Mongolia is a vast province of China lying west of the capital Beijing. The highlands of Ordos in eastern inner Mongolia have become rich thanks to the discovery of vast resources of coal and natural gas.

The new wealth has bought with it investors, foreign cars and luxury houses but it has also put pressure on the region’s already scarce water resources, according to a report in Svenska Dagbladet.

A Swedish-backed organic toilet project has been launched in the region to address at least one of the problems of a water shortage bought about by sixty years of environmental mismanagement.

The residents of the city of Dongsheng share the equivalent of 100 litres of water per person per day making it one of the driest places on earth, according to Svenska Dagbladet.

When there is only sufficient water for the barest daily necessities a dry toilet seemed a natural step for the inhabitants of this harsh terrain to take and in stepped the Stockholm Environment Institute (SEI).

SEI has worked on a concept entitled EcoSanRes for several years aiming to find sustainable solutions to areas lacking clean water and drainage.

The toilets use no water at all and produce only compost. Dongsheng households employing the technology use a third less water than normal, enough to persuade the city to launch a large scale project in 2002.

“Dongsheng demonstrated that it needed both new solutions and had the financial resources to initiate a full scale project. They agreed to let us test the technology in a new residential area,” said Arno Rosemarin at SEI to Svenska Dagbladet.

But not all of Dongsheng’s residents were enamoured with their new toilets and many home owners felt ashamed that their apartments smelt less than savoury, the newspaper reports.

“We were sceptical to begin with but now that the construction has been modified it is all working fine now. To live in this region in the long term we have to regulate the consumption of water. We will just have to put up with the initial inconvenience,” said Dongsheng resident Mang Lai to Svenska Dagbladet.

The Swedish-designed dry toilets have been installed in 832 apartments in 42 four-five storey buildings in Dongsheng. The total cost of the project, financed by SEI’s public and private partners, equates to around 170 million kronor ($28.4 million).

SEI was established in 1989 following an initiative by the Swedish government to develop an an international environment/development research organisation.