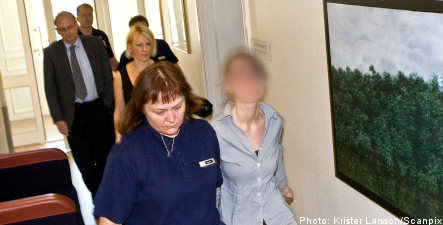 Meanwhile, a representative for the mother, 23-year-old Emma Jangestig, her boyfriend, and the children’s father read a request for several hundred thousands of kronor in compensation.

Schürrer alternated between looking attentively at the prosecutor and conferring with her defence lawyer and her German counsel, who, according to her lawyer Per-Ingvar Ekblad, is there as “an observer and moral support”.

Ekblad emphasized that Schürrer contests the accusations against her.

“My client denies that she could be guilty of the crime,” he said.

A sizeable delegation from the press has gathered outside the courthouse, located in the central Swedish town of Köping.

Among the media representatives gathered in Köping are several from major newspapers from Schürrer’s hometown of Hannover in Germany.

The case is based largely on circumstantial evidence, as solid technical evidence such as DNA, is lacking completely.

Head public prosecutor Frieda Gummesson has called upon an unusually large number of witnesses – 56 in total – to testify in the trial.

Around ten witnesses will help the prosecutor strengthen the motive by demonstrating that the accused hadn’t gotten over her break up with the mother’s boyfriend.

Nearly as many will certify that Jangestig was conscious when she was taken away from the crime scene in an ambulance.

It was the evening of March 17th when the children, three-year-old Max and his two-year-old sister Saga, as well as Jangestig were found seriously wounded in the family’s house in Arboga. The children later died in hospital.

The children’s father was initially suspected of the crime, but police quickly shifted their focus to the former lover of Jangestig’s new boyfriend, and a European warrant was issued for her arrest.

She was arrested in the German city of Hanover at the end of March and was handed over to Sweden following a request for her extradition.