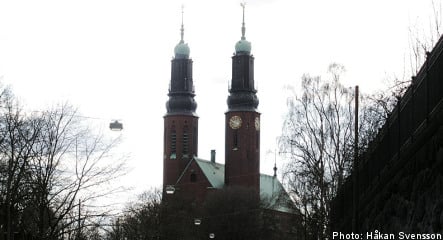 “Yesterday morning we discovered that our church had been covered in flyers with texts saying that homosexuality was wrong … Two other churches in Stockholm also had the same thing,” the pastor in the Högalid parish, Gunilla Linden, told AFP.

“There were direct references to Europride, but also against female pastors and loud music and dancing,” she said.

The flyers, posted by a group calling itself “orthodox Christians”, were taped to the exterior walls of the churches and strewn on the ground with rocks to hold them in place.

Högalid church is located near the Europride festival area, and the Swedish Lutheran Church, to which about 75 percent of Swedes belong, also has an information tent on the festival’s main park grounds.

“We have a spiritual responsibility for everyone in our parish, so as such we are involved in Europride,” Linden said.

“Our message during the festival is to see the good in people and give people a good role model,” Linden said, adding that the incident had been reported to police.