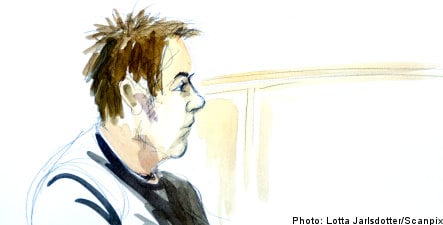 Niklas Jangestig was originally a suspect in the case.

Jangestig, who is separated from the murdered children’s mother, Emma Jangestig, was arrested and held for several hours after the murders in Arboga on March 17th.

Niklas Jangestig told Västmanland District Court on Friday that he was informed of the death of his children when he was in police custody.

“Then I fell apart. I panicked and found it hard to breath,” he said under the questioning of his counsel Kari Skönebrant.

Jangestig told the court that police asked him if he wanted to be given something to calm him down, just prior to informing him that the prosecutor planned to charged him with the murder of his two children and the attempted murder of their mother.

“The feeling that you get when you know that your children are dead and then that you are the one accused of their murder, is indescribable,” he continued.

Niklas Jangestig was unable to control his emotions in court and cried profusely when he told of his visit to the morgue to identify his dead children – three-year-old Max and his two-year-old sister Saga.

“I sat with my children for around two hours and cried and cried,” he said.

It was only then that he fully realized that his children were gone.

“I have never felt so bad in all my life,” Jangestig said through his tears.

“My children weren’t murdered. They were butchered like animals.”

Niklas Jangestig admitted to the court that his relationship with the children’s mother, Emma Jangestig, had been tempestuous, but said that lately they had been able to cooperate regarding the children.

The boyfriend of Emma Jangestig, Torgny Hellgren, followed Niklas Jangestig on to the witness stand on Friday morning. The prosecutor asked Torgny about his relationship with the 32-year-old Schürrer, who he met on holiday on Crete in the summer of 2006.

“We had a passionate relationship for around four or five days. We were good together,” he said.

Day two of the trial ended badly for the prosecution’s case when a memory expert questioned the testimony of Emma Jangestig.

Emma Jangestig had told the court earlier on Thursday that when the trial began she immediately recognized Schürrer as the woman who had bludgeoned her two children to death with a hammer.

“When I looked at the accused, I broke down completely. Because I recognized her as the woman who stood outside my door,” she told the court on the Thursday morning.

Sven Å. Christiansson, a memory expert that has examined Emma Jangestig, told the court that the murdered toddlers mother is suffering from aggravated memory loss.

“One can question whether she has any memory from the time of the murder or whether she is backing up her memory from her reflections,” ” said Christiansson to news agency TT.

“If one thinks for enough time about something it starts to feel familiar and ultimately becomes a autobiographical memory.”

Christiansson’s testimony was backed up by neurologist Jörgen Borg who was the next to testify on Thursday afternoon.

Emma Jangestig said to the court that the discrepancies in her story and recollection of the events have to do with her feeling scared in police interviews in the aftermath of the murders. The support of her family and friends have helped her to “allow herself to remember” the events of March 17th.