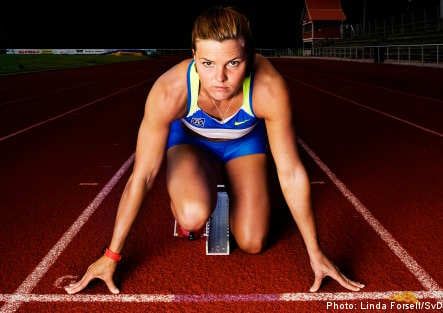 From badminton and tennis to football and wrestling, Sweden’s 132 Olympic athletes will compete in 19 separate events in the 2008 Summer Olympic Games. But despite fielding a team with Olympic-level athletes in a wide range of events, Sweden will likely only see a few of their own step onto the medal stand in Beijing.

The consensus favourite to win a gold medal is high jumper Stefan Holm, the reigning Olympic champion. Holm won in Athens in 2004 with a jump of 2.36 metres. In 2005 he set a personal indoor record of 2.40 metres, and just three weeks ago he set a personal outdoor best of 2.37 at the Athens Grand Prix. Long considered one of the world’s top high jumpers, Holm appears to be at the top of his game as he heads to Beijing.

Medal hopes are still high, but somewhat diminished, for hurdler Susanna Kallur due to a nagging thigh injury suffered at the world indoor championships in Valencia in March. It was a tough break for Kallur, who a few weeks prior had set a new indoor world record of 7.68 seconds in the 60 metre hurdles at a competition in Germany. Still, Kallur insists she will be ready to sprint for gold in Beijing.

Kallur, and her twin sister Jenny, hold American citizenship on account of being born in New York. Their father, ice hockey legend Anders Kallur, was playing for the New York Rangers at the time.

Carolina Klüft left Athens in 2004 with a gold medal for her performance in the heptathlon, an event she has dominated for much of her career having won three consecutive world championships. Swedish sports fans assumed Klüft was on track to win another gold in Beijing until she unexpectedly announced in March of this year that she was quitting the heptathlon altogether. Instead, she’s competing in the triple jump and long jump, two events in which she is far from dominant. Analysts project her best chance for a medal is in the long jump.

Klüft’s husband Patrik was a competitive pole vaulter who took bronze in the event at the 2003 world championships. When the pair married, Patrik gave up his last name of Kristiansson and know goes by Patrik Klüft.

Two Swedish wrestlers, one of each gender, are tipped as probable medal winners in the 2008 games.

On the men’s side, Ara Abrahamian is looking to avenge his controversial loss in the 2004 Olympic finals of the 84 kg Greco-Roman wrestling competition. At 33-years-old, Abrahamian’s third Olympics may be his last chance to win gold.

For the women, Ida-Theres Nerell is looking to improve upon her fourth place finish in Athens. Since then, she’s pocketed three European championships, as well as a silver at the 2007 world championships. She’s won her last three tournaments heading into Beijing and is widely expected to win a medal there.

Abrahamian is originally from Armenia, but fled to Sweden following the 1988 earthquake which killed 25,000 people.

Nerell said in a recent interview with the newspaper Metro that she enjoys fencing in her spare time and is a big fan of books by author Paulo Coelho.

One of Nystrand’s sponsors is the IQube business incubator, owned by Johan Staël von Holstein, and former home to The Local.

Stockholm-native Therese Alshammar will be competing in her fourth Olympics and is still searching for her first Olympic gold. She took home two silvers in Sydney in 2000 in the 50 and 100 metre freestyle, as well as a bronze as a member of the freestyle relay team. In Beijing she’ll again swim as a part of the relay team, but has decided to focus on the 50 metre freestyle in hopes of increasing her chances for a medal.

Alshammar has won more individual Swedish championships than any other swimmer.