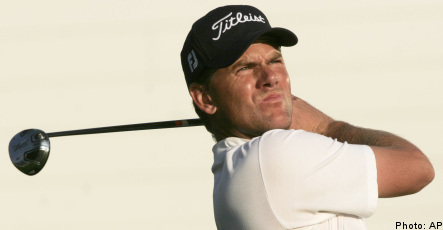 The giant Swede, who is ranked 22nd in the world, is the only player to record top-10 finishes in each of the first three majors in 2008.

“I now feel comfortable playing in the big events where as before I had a bit of a problem,” said Karlsson, who fired a two-under 68 in Thursday’s first round of the final major of the season and shares the lead with India’s Jeev Milkha Singh.

“This year my swing is better and I feel more content with life in general.”

The 38-year-old finished eighth in the Masters, fourth at the US Open and seventh at the British Open.

On Thursday, Karlsson birdied the par-four, 11th hole then stumbled slightly down the stretch with back-to-back bogeys on 14 and 15. More importantly he didn’t let a double bogey on the first hole get him down.

“I was slightly upset,” he said of the double bogey. “When I do something like that I just try to remember that I actually can play golf even though it didn’t look like it. It helped that I hit a great two putt on number two.”

Karlsson said as he gets more experienced on the Tour, he is able to relax better in the big tournaments.

“Now on the first tee I am sort of my own boss a lot more than I’ve ever been,” he said. “Before I tried to force results and tried to make things happen instead of just going out there and playing.

“I tried to play too difficult for a while and just saw big rough and I couldn’t play.

“The shots can only come when I am standing on the first tee and not too afraid to go out and meet a very tough golf course.”

The son of a greenskeeper, Karlsson is one of the tallest players in the

He is appearing in his seventh PGA Championship and finished 57th last year. His best finish was a 40th in 2006 in Chicago where he shot a third round 69.