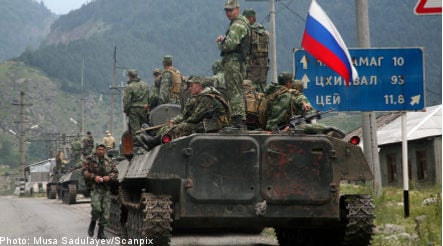 Bildt is engaged in the conflict between Russia and Georgia over the breakaway province of South Ossetia. On Friday Bildt spoke to representatives from all sides in the conflict that many observers fear will spiral into all out war.

“The way in which the situation in South Ossetia has deteriorated is a cause for profound concern. It is extremely important that all those involved show restraint and play their part in bringing about a political solution,” said Carl Bildt in a foreign ministry statement.

“I am particularly concerned about the impact of the conflict on civilians. Georgia and Russia are dangerously close to war and there is a great risk of this spreading to other parts of the Caucasus.”

Bildt remind Russia of its responsibility and called for restraint.

Since Georgia’s declaration of independence the province of South Ossetia has agitated to breakaway and unite with the Russian province of North Ossetia. The issue has led to a protracted conflict with the Georgian government which has in recent days broken out into open war.

Bildt called for an end to the violence and underlined the importance of dialogue.

“It is important that the parties in conflict quickly start to communicate so as to put an end to the use of violence. I give the full support of the Swedish Government to the OSCE Chairman-in-Office, the Foreign Minister of Finland, in the OSCE’s efforts to bring about talks between the parties.”

“Sweden has a broad network in the region and good contacts with various actors, and it goes without saying that we will try to use this in the best possible way. A new war in the Caucasus is not in anyone’s interests.”