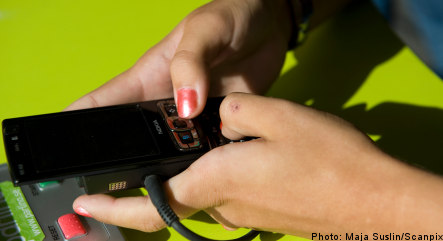 The second SMS Swedish Championship was held on Norrmalmstorg in Stockholm in Friday. 17-year-old My Svensson from Växjö claimed the prestigious title and the 25,000 kronor ($3,924) first prize.

News agency TT was in the thick of the action and asked My how it felt to be the Swedish champ.

“Great, but I was very nervous in the final. Everyone was talking about how much money was at stake.”

My’s winning text was as follows: “OK, write fast now. Faster! D1a is going too slowly. Do you spell slowly like that? :-S no time to look, have to get finished. Soon, only 1 more word. 😛 Ready!” (“Ok, skriv fort nu. Fortare! D1a går för långsamt. Stavas långsamt så? :-S Hinner inte titta, måste bli klar. Snart, bara 1 ord till. 😛 Klar!”) in the record time of 50 seconds in the semi-final. In the final it took her 61 seconds which was enough to hold off the chasing pack.

To add to the arduous challenge the competitors were told to write their texts without the help of the T9 word prompt function.

The training schedule of an Olympian is the secret behind My Svensson’s success – she sends 40-50 texts per day, mostly to her three best friends.

TT: What do you write about?

“Nothing of any importance really. A little about what’s going on,” My Svensson said.

The money will be used for a trip to France next year after My graduates from high school.