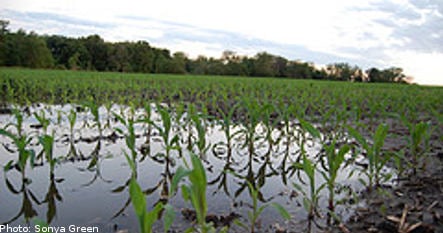 A stable high pressure front would improve the situation, but meteorological agency (SMHI) forecasts indicate continued low pressure and heavy rain which could threaten the harvest.

The situation is precarious for Swedish grain farmers. Dry weather in the beginning of the summer hindered sowing and when the crops are now ready for harvesting the heavy rain is causing the problems.

“The heavy rain means that the quality of the crops declines. A large part of the cereals harvest in central Sweden has been lost and has become fodder which gives a lower price,” said Mikael Jeppsson at the farmers’ union (Lantmännen).

In the southern province of Skåne half of the harvest is already completed.

“We have not as yet noted any problems with quality, but we don’t know how it is going to look when we get going again after the rain,” said Mikael Jeppsson.

In central Sweden around 90 percent of the harvest remains. Quality problems with the grain already harvested have made it increasingly important that the foul weather ends, so that the remainder of the harvest is not destroyed.

“When a healthy, strong seed kernel is soaked in the rain, suffers drought and then drenched again the kernel becomes active and starts to grow into a new plant. It is when this process begins that quality is affected, which we have already noted in several places,” said Jeppsson.

If the process continues to the point that a sprout forms, then quality is seriously in threat.

“It then becomes doubtful whether the crops can even be used for fodder,” said Jeppsson.

A stable high pressure front across the country is needed in order to be able to collect the remainder of the Swedish harvest.

“Fourteen days to 3 weeks of warm, dry weather, preferably windy, would enable most of it to be collected,” according to Jeppsson.

However SMHI forecasts show no indication of being kind on the farmers.

“We will have to wait a couple of weeks for good weather. It is looking generally unstable in the near future with two fronts of low pressure in the coming week,” said Johan Lundgren at SMHI.

To rub salt into the wounds of the farming sector, grain prices have declined worldwide as a result of good harvests in Europe, the USA, Russia, Australia and China.

Jeppsson was asked by news agency TT if Swedish farmers would struggle to survive financially.

“I don’t know. It is difficult to talk generally, but one can conclude that revenues will be lower this year due to poorer harvests, lower prices and probably also inferior quality.”