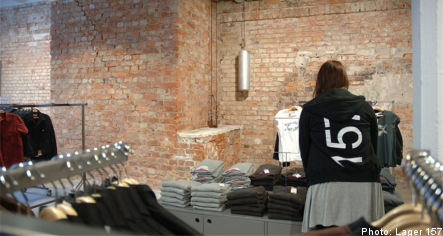 The school run on Thursday morning was hectic as usual. Just one week on from the prolonged summer holidays, we were not yet used to the routine.

We were similarly unprepared for the sight that greeted us as we entered the school yard. Everybody — including my younger son, all pupils and their parents (I did not glimpse any teachers) — was modelling new clothes. Like sheep, branded after shearing, they all had Lager 157 written on the backs of their new robes.

Shocked by the modern Utopian sight, my older son quickly cancelled our after school meeting at the new clothes outlet in town.

But I was there on Thursday night to join the rest of the inhabitants of Hälleforsnäs. All the nearest neighbours of the new establishment had all been specially invited to a pre-opening shopping evening in this small village 120km west of Stockholm.

Families and friends gathered on the grounds of the old ironworks that had flourished in Hälleforsnäs in the latter part of the last century. But after its closure in the nineties, the place fell into disrepair until – less than a year ago — the inhabitants of our little town were informed that we were to have a shop there.

Initially there was a mixture of excitement and exasperation, but on the whole we were all quite exhilarated. Neighbours discussed the pros and cons over fences as we watched the clean up, development and ultimate transformation.

Everybody came along on Thursday night to check out the new (and only) shop in town, the freebies and of course the coffee and cake. The doors were opened to a massive hall and when we finally set foot inside the building we soon found ourselves in a maze of rooms and paths filled with clothes and people.

My first instinct was to turn around and run, but before I knew it I had a freebie voucher and a stylish shopping trolley in a hand that only seconds before had clutched the little fingers of my 6-year-old son, who had now disappeared into the crowds.

I felt compelled to stay and, indeed, to consume, since the offers were only available for the day.

And on Friday Lager 157 opened the public . I might just go and have another look – I know my way around now…