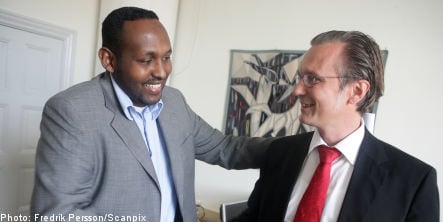 Because those associated with the al Barakaat International Foundation, based in the Stockholm suburb of Spånga, had no way to defend themselves against the charges, the Court of Justice ruled that their fundamental rights had been violated.

“It’s with great joy that this ruling has come. Time after time we have said that we were subjected to a violation of our legal rights, and the judgment confirms that,” said Abdirisak Aden, one of the three Somali-born Swedes who was singled out by the United Nations, the EU, and Sweden for associating with terrorists and subsequently had their assets frozen as a result.

Thomas Olsson, who handled the case for the three Swedes, sees the decision as good news for everyone who has used the informal al Barakaat banking network for sending money to relatives back in Somalia.

“But this is also an unbelievable relief for all of us. The court showed that human rights must be enforced when we are fighting terrorism, and that there is a guarantee that the battle is about something which is worth protecting, namely the democratic state governed by law,” he said.

The court also nullified the regulations which made the freezing of al Barakaat’s assets possible.

In setting aside the 2005 ruling, the court concluded that “the rights of the defence, in particular the right to be heard, and the right to effective judicial review of those rights, were patently not respected”.

At the time, the United States Treasury Department generated a list of individuals and organizations it saw as having ties to terrorism.

The list was subsequently accepted in its entirety by the United Nations, which in turn created its own list.

As a UN member, Sweden was required to make legislative changes in order to enact the provisions.

In addition to al Barakaat, three Somali-born Swedes were affected by the new asset-freezing legislation.

None of them ever saw any concrete evidence against them, nor were they given the possibility to defend themselves in court.