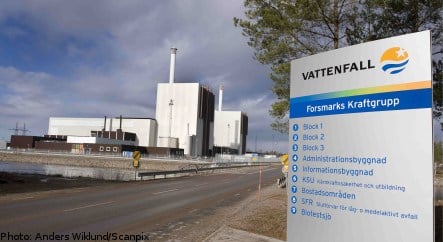 During a routine inspection on August 18th this year, SSM inspectors discovered that an emergency cooling vent in reactor 2 at the Forsmark nuclear plant on Sweden’s east coast had been closed since their inspection there a year earlier.

The vent is used to keep the reactor core cool if the regular cooling system stops working.

While SSM says the incident was not particularly serious, it cautioned that it could indicate slack safety routines at the plant.

“We think that it is serious that Forsmark has not followed its own safety routines. We want to know if this was a one-time occurrence or (due to general) sloppiness, simply how this could have happened,” SSM spokesman Anders Bredfell said.

“This is a question of safety culture. We are not happy with what has happened,” he added.

The Forsmark plant is already under special supervision following several incidents there that culminated in a power failure on July 25th, 2006.

The Forsmark 1 reactor was immediately shut down after two of four back-up generators, which supply power to its cooling system, malfunctioned for about 20 minutes, with some experts suggesting a catastrophic reactor meltdown had been narrowly avoided.

Forsmark said on Friday that it planned to review its routines following the revelation.

Andersson insisted however that the closed vent was “a one-time occurrence. We continuously work to ensure that routines and instructions are followed.”