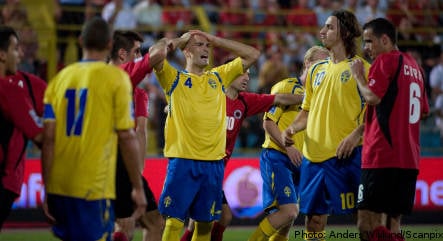 It was an injury hit Sweden that took the field in Tirana looking to secure a victory on the road to their six successive major tournament.

Coach Lars Lagerbäck elected to change Sweden’s default 4-4-2 formation to 3-5-2 and employed Olof Mellberg, Petter Hansson and Daniel Majstorovic in a reshuffled rearguard. Only Mellberg seemed able to carry the ball forward and link up with the defensive midfield pairing of Tobias Linderoth and Daniel Andersson.

Linderoth added to Sweden’s injury woes – which had seen Anders Svensson and Christian Wilhelmsson ruled out before the match – when he limped off with a foot injury after barely a minute played. He was replaced by Sebastian Larsson.

Lagerbäck chose to deploy Mikael Nilsson and the inexperienced Oscar Wendt on the flanks but they made little progress and Sweden looked dangerous only when long balls found their destination in Inter Milan star Zlatan Ibrahimovic.

Ibrahimovic was partnered by veteran Henrik Larsson winning his 100th cap for Sweden. Larsson had far from his best game in the yellow and blue and created little, not for the want of trying however.

Lyon’s Kim Källström was given the chance to shine in an offensive central midfield role but questions remained unanswered over the 26-year-old who retains the epithet of “man of the future” despite nearing his peak.

Sweden had a couple of chances and on balance could have claimed the three points but Albania also tested Swedish goalkeeper Andreas Isaksson on a number of occasions.

“We were better. But it was not a question of underestimation, Albania will cause problems for other teams in the group also,” Lagerbäck said to the assembled press after the game.

Sweden and Lagerbäck now have three days rest and recuperation before they face Hungary at home at Råsunda Stadium in Solna on Wednesday. Lagerbäck was unable to confirm if the new formation would be retained.

“We’ll have to see. Whatever happens we will try to play better against Hungary. I am presuming that the match will be very different. They had nine defenders behind the ball, that makes it hard to find space,” Lagerbäck said before he left the Qemal Stafa stadium in Tirana with Sweden’s World Cup campaign under a cloud.