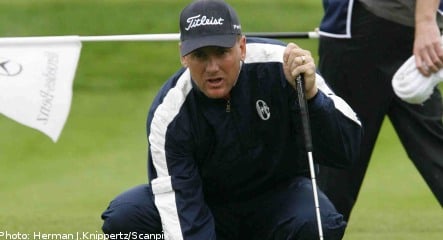 Karlsson’s three under par took him to eight under for the tournament at the halfway stage with Jean-Francois Lucquin in second place after the Frenchman added a 71 to his opening 66.

The Swede posted birdies at the third, fifth and seventh in an impressive front nine 33 but managed just one birdie at the 13th on the way in and that was erased by a bogey at the par five 15th.

“I’m obviously extremely happy with that, especially to be playing in the last group,” said Karlsson.

“It’s great to be sort of a little bit more under pressure. The most important thing is to keep playing the way I’m doing and keep building on all of the things I’m doing well.”

Karlsson will join fellow Swede Henrik Stenson when Europe bids to retain the Ryder Cup for the fourth consecutive year at Valhalla Golf Club in Louisville, Kentucky from September 16th-21st.

Europe has dominated the United States in the Ryder Cup over the last 13 years, winning five of the last six, including the last three straight tournaments.

The European success is put down by many observers to a “one for all, all for one” team spirit that will have raised eyebrows in Brussels where promoting

Many observers feel that the origins of this team ethic lie in the 1970s and early 1980s when the US PGA Tour was the Goliath to the European Tour’s David.

was the perfect vehicle for exacting a satisfying measure of revenge.

It helped also that there emerged at that time in Europe an eclectic bunch of top class golfers who each brought different ingredients to the table.

The dash and bravura of Spain’s Ballesteros and Jose Maria Olazabal, the ruthless calm of Germany’s Bernhard Langer, the single-mindedness of England’s Nick Faldo and the Celtic grit of such as Sam Torrance and Ian Woosnam.

It is their successors – Sergio Garcia, Søren Hansen, Lee Westwood, Padraig Harrington and Swedes Karlsson and Stenson, that form the backbone of the team that will defend the cup in Valhalla.

But the Americans will not let this blend of Swedish steel, British pragmatism and Spanish sunshine off lightly and US captain Paul Azinger feels that having something to prove could this year work in the USA’s favour.

your sleeve and sometimes the emotion reaches a level when it can look ugly,” Azinger warned.