Swedish players Robert Karlsson and Henrik Stenson produced far from their best golf as the former lost a substantial lead to tie and the latter, playing in the foursomes with England’s Paul Casey, fell 3 and 2 to Justin Leonard and Hunter Mahan.

Casey and Stenson opened well in their match although soon started to make too many mistakes.

“I didn’t play at my best, but not too bad either. We took the lead with three straight

birdies, and we didn’t manage to keep it up. It is difficult to find the flow (in the foursomes), sometimes you don’t putt for five holes, and then get a putt of 15 metres and then don’t put again for three holes,” said Stenson.

Fellow Swede Robert Karlsson, playing with Irishman Padraig Harrington, took the lead over the US pairing of Phil Mickelsson and Anthony Kim but their putting let the Americans back into the match which ended in a tie.

Large crowds met the players on the opening competition day of the 37th Ryder Cup and they were in a festive mood.

Tens of thousands of keyed up fans packed the grandstands and lined the fairways at Valhalla Golf Club, and were rewarded by seeing the hosts, the pre-tournament underdogs, take a 5.5 to 2.5 point lead at the end of the first day.

Around the course chants of “U-S-A! U-S-A!” were countered by the sing-song “Ole, Ole, Ole, Ole” of European fans.

Players could even catch a glimpse of leprechauns and matadors in the gallery, as impassioned fans made a statement with their wardrobes.

Even Scotland, without a player on the European team this year, was still remembered, as kilt-wearing fans toted a life-sized cardboard image of long time Ryder Cupper Colin Montgomerie around the course.

“I think I saw five leprechauns and a matador,” said Paul Casey.

“I saw Monty out there as well. It was great fun,” he added. “I didn’t know five leprechauns and a matador could be so loud, but it was highly entertaining.”

Early leads for the Europeans in seven of the day’s eight matches quieted the crowds at times.

But as US fortunes surged, so did the chants of “U-S-A!”

Overall there was little sign of the animosity that has tainted some previous Cups.

But American fans hungry to see their heroes wrest back the Cup after three straight defeats weren’t averse to acid commentary on some of their foes’ more obvious errors.

Even so, players and team captains were delighted with the electric atmosphere.

“The atmosphere out there is great and the crowds are really fair,” European captain Nick Faldo said.

“Unfortunately they are outnumbering us pretty heavily up that 18th out there, but I warned the guys that would be the case.”

US captain Azinger who had raised eyebrows with remarks at a downtown pep rally on Thursday night, telling fans it was all right to cheer a missed putt by the Europeans, said that enthusiastic galleries are all put of the Ryder Cup.

“I think you’ll find the great fans of Kentucky have done nothing to let us down or embarrass us,” he said, adding that the Louisville fans were living up to his hopes of acting as the “13th man” on his team. 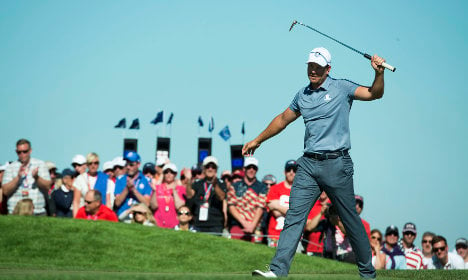 Swedish golf player Marcus Kinhult competes in the second round of the HNA Open de France, as part of the European Tour 2018, on Saturday. Photo: Eric Feferberg / AFP
Kinhult is six under at the halfway stage with England's Chris Wood in second at four under, a shot clear of Spanish world number five Jon Rahm and Welshman Bradley Dredge, the overnight leader.
World number two Justin Thomas is two under alongside fellow American Julian Suri, England's Matthew Fitzpatrick and France's Gregory Havret.
The French Open is taking place at the Saint-Quentin-en-Yvelines venue which will stage the Ryder Cup from September 28-30 and when Europe will attempt to reclaim the trophy from the United States.
After finishing third at the Qatar Masters in February, unheralded Kinhult had made just three of eight cuts since. The 21-year-old had started his first round on Thursday with four straight bogeys but went ten under for his next 32 to become the first player to start with four dropped shots and hold a 36-hole lead since records began in 2000.
“It feels good, it feels really good,” he said. “I got off to a great start and played well from there. The wind picked up a little bit on the back nine, the last four or five holes or so, but happy overall. Saturday is going to be a big day and hopefully Sunday as well. It's a position I have never been in before so we'll see.”
Thomas birdied the third, 11th and 15th but he found the hay on the left of the 17th, missed the green and failed to get up and down in surrendering a double-bogey.
“Man, it was one of the better rounds I've had in a while. I could have shot a 1-under on the front easy, could have shot a three or four under,” said the American. 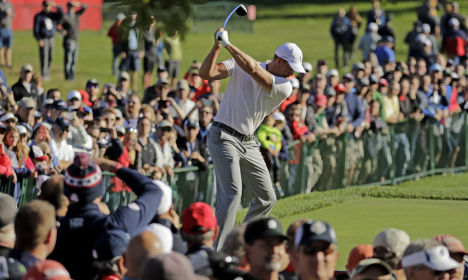 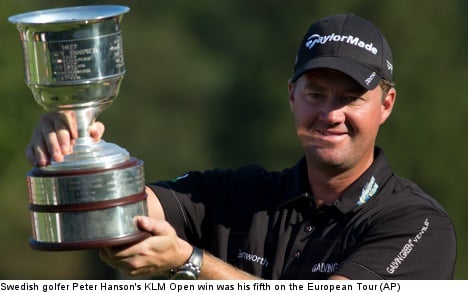