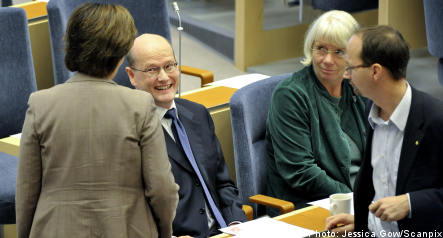 “We’ve seen it when to comes to a-kassa,” he said, referring to Sweden’s system of unemployment insurance funds.

Östros pointed to Borg’s own projections that unemployment will be higher in the current government’s final year, 2010, than it was during Borg’s first year at the helm.

Östros added that it was improper of Borg and the government to give Swedes with high incomes larger tax breaks than those offered to pensioners.

But during the day’s debate in the Riksdag, Borg countered that Östros’s time was up and questioned why the Social Democrat failed to mention that his party’s plans would raise taxes by 70 billion kronor ($10.7 billion) if it succeeds in taking power in 2010.

“The government is once again choosing to distribute the state surplus to those who are already well-paid,” she said.

The Green Party’s Mikaela Valtersson stated that Sweden’s unemployed and ailing populations are worse off after two years under the current government.

Reaction from unions and other organizations was mixed.

The Swedish Confederation for Professional Employees (TCO), a white-collar union, thinks that the budget surplus should be used to reform the social welfare system during difficult economic times.

Meanwhile, the Union of Civil Servants (ST), believes the 2009 budget proposition is the best that the government has presented thusfar, but that it still lacks money for several important areas which will lead to fewer getting jobs and consequences for business.

The Swedish Confederation of Professional Associations (SACO), a union representing Sweden’s doctors, lawyers, teachers, and other professionals, is happy the government makes it clear that a-kassa will no longer be obligatory and that the budget will make it cheaper to join Sweden’s employment insurance funds.

SKTF, another public sector union, is also satisfied with the budget, giving it a passing grade.

The Stockholm Chamber of Commerce, on the other hand, blasted the government’s infrastructure funding proposal, claiming that Sweden has more to gain from building new roads and rail lines than amortizing state debts.

The Kommunal employee association, which represents workers in the health and construction trades, believes the proposal for lowering fees for joining employment insurance funds comes too late, but is nevertheless happy to see that the government understands that its “devastating experiment” with a-kassa was a failure which needs to be corrected when dismal economic times are just around the corner.

According to the Företagarförbundet, which represents small businesses, the a-kassa fee reduction is laudable, but lacks any impact. A one percent reduction doesn’t make a difference and isn’t enough to improve the business climate, it claims.

And the Swedish Shareholders’ Association is happy that the government plans to use 2009 to review that taxation of savings in order to make it more simplified and effective.

The Swedish Society for Nature Conservation (SSNC), however, disagrees with the government’s decision to remove money from efforts directed at biological diversity to other environment-related spending areas.