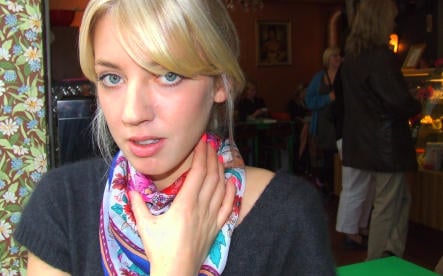 Her soulful tunes and honest lyrics could draw comparisons with the troupe of young women singer-songwriters currently emerging from the UK music scene, such as Laura Marling, Kt Tunstall and Adele. Certainly the old-school jazz and soul influence on her songs, draws a clear connection to British artist Duffy.

Indeed her second album, Och Vinnaren Är (And the Winner Is) released earlier this year, frequently tilts an appreciatory nod to Maggio’s jazz background: “I sang a lot of standards when I was say 14 to 17 when my voice was developing and I was finding my own style…I’ve tried out a lot of different genres in music but I think jazz has been the biggest influence for me”.

Despite such analogies to other, international artists, Maggio is very much a Swedish singer. “I’ve done lots of songs in English but I’ve never recorded or released them”.

She adds: “I kinda felt like I was writing songs for someone else. It must be the language barrier or something, but I never really felt that they were my words, but that I was just repeating things that I had heard somewhere else. I feel more at home with Swedish I guess”.

Whichever language Maggio decides to sing in, the whole-hearted veracity of her music is unmistakable. She achieves a wonderful vulnerability and endearing naivety of tone in her songs whilst doggedly examining the reality of human relations.

Although a self-confessed “very happy person”, Maggio describes how her songs, in contrast to their jazzy, upbeat rhythms, often steer towards the darker side of human emotion lyrically.

“My songs can be positive in a way, but there is always that melancholy side – I like to use minor chords and so on. I always tend to like that sort of stuff and it always seems to get my imagination going”.

In contrast to her typically Scandinavian wholesomeness – loosely waved blonde hair, healthily glowing skin and an understated, yet artfully fashionable, outfit – Maggio is a woman not afraid of showing her edginess.

In the video for her most recent hit, Stopp, Maggio dons a pair of somewhat disconcerting gloves made from scissors and knives. “It’s because I saw the Edward Scissorhands movie just a few weeks before” explains Maggio:

“The song is about loving somebody that you were with and then realizing that you want that person back desperately and you can’t do anything about it. The more you try to get that person to love you, the further away they move from you… So I thought that the scissor hands was a good metaphor for how when you hurt somebody and you hurt yourself, you can’t really touch that person at all”.

With a mischievous smile Maggio also concedes that she wanted to experiment with a more sinister character for this production. “I wanted it to be a bit psycho too, a bit like a scary stalker person! I didn’t want cute, I wanted to be a little scary for this video”.

However, in the flesh, Maggio is a delight to talk to and both a funny, grounded, and very modest young woman. On her recent nomination for the MTV Europe Music Awards as Best Swedish Act, Maggio simply comments: “Yeah that’s nice, there were so many acts so I was really surprised that they picked me.

“But I’m the only girl so I think I should win”, she says with a good-natured chuckle. “I hope I’ll get all the female votes – a bit of female solidarity!”

It’s not just for awards that Maggio is rather self-deprecating – she is still racked by nerves when appearing on stage, despite her love of singing live.

“When I come to a show and it’s empty, I always worry that no one will turn up. I’m like ‘oh no, it’s only going to be us and 10 others! I was so nervous when I played in Malmo recently. It was such a big venue and I was totally freaking out and then 5,000 people turned up! In the end I almost couldn’t hear myself singing because they all knew the lyrics and were joining in. That was a real moment for me”.

In talking to Maggio, it becomes rapidly apparent that she is truly passionate about live performance and the creative process. On writing, and the inspiration behind it, she says:

“I love just having a blank page and knowing that I want to make something from it, and then you start writing and something comes out – I love the feeling of not knowing what is going to happen”.

There is the distinct feeling that although the release of her second album has brought her considerable success and recognition, it is also a very much a beloved and personal achievement for Maggio:

“I feel the pressure to start making a new album like now, now, now. But I still like this album too much, I’m afraid I just end up making another one just like it. I want to start hating the songs a little bit before I start writing again“.

Maggio is an artist replete with contradictions: soulful jazz scores offset by modern drum beats, an international musicality sung resolutely in Swedish. But upon meeting her, surely her greatest contradiction lies between the assured, original and edgy singer-songwriter and someone who seems to rather not believe her luck.

When asked to reveal the highlight of the past few years, Maggio endearingly and simply answers: “I think when I realized that I could really do it, when I started writing and it really clicked…that was the highlight”.