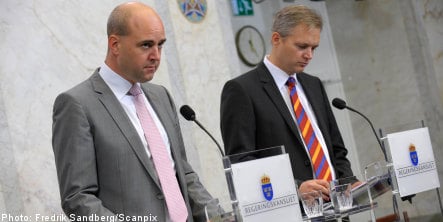 “The Alliance has come together on the FRA issue,” said Prime Minister Fredrik Reinfeldt at a press conference, referring to the abbreviation for Sweden’s National Defence Radio Establishment (Försvarets Radioanstalt – FRA), which has served as the measure’s nickname in the Swedish press.

He emphasized that all 178 Riksdag members belonging to the four governing parties support the new version of the so called FRA-law.

Defence minister Sten Tolgfors said the government would present a new bill to the Riksdag later in the autumn which includes amendments improving upon privacy protections included in the original bill, which the Riksdag approved in June.

He added that only communications traffic included in applications to a special court would be monitored.

“Therefore, there is no longer a reason to talk of mass surveillance,” said Tolgfors.

The primary revisions to the law include the creation of a special court which will give permission for signals intelligence requests for FRA from the government or the Armed Forces.

In addition, signals intelligence operations will be limited to certain sections of telecommunications traffic, and prior to commencement, the rationale for the monitoring operation must be reported to the court.

Another new provision would allow individuals who have been the subject of FRA’s monitoring to contest whether or not the operations were carried out for the wrong reasons.

During the day on Thursday parliamentary groups from both Fredrik Reinfeldt’s Moderate Party, and the Liberal Party (Folkpartiet), which included several prominent critics of the original bill, held special meetings to further debate the measure.

The original proposal expanded FRA’s powers to carry out signals intelligence surveillance on cross-border communications traffic as well as gave the agency a great deal of discretion in deciding what sort of communications were monitored.

In the days before the June vote, through which the bill passed by a razor thin margin, a wave of public opposition to the measure emerged which continued to fester throughout the summer.

The vote in June left an opening which allowed for new debate and amendments on the bill to take place this autumn.

Several politicians who had voted for the measure openly admitted they regretted supporting the original FRA-law, leading to a frenzy of internal discussions among the four governing political parties about how to salvage the measure and avoid a major political embarrassment for the government.

Fredrick Federley of the Centre Party, one of the FRA-law’s most vocal opponents, is satisfied with the changes in the new version of the bill.

One of the most significant revisions in his eyes is the stipulation that only the government and the Armed Forces be allowed to give signals intelligence orders to FRA.

Another difference is that even the government be required to seek permission from the special court.

“There’s no reason for any more screaming and shouting,” he said.

One of the Liberal Party’s FRA-law critics, Cecilia Wikström, plans to vote yes to the new bill if it includes an amendment which reflects what was decided by her party’s parliamentary group Thursday afternoon.

“Here we’ve hit on something which I think that most citizens cannot only accept, but can even praise,” she said.

CRIME
Let police use CCTV without a permit: Sweden
Url copied to clipboard!