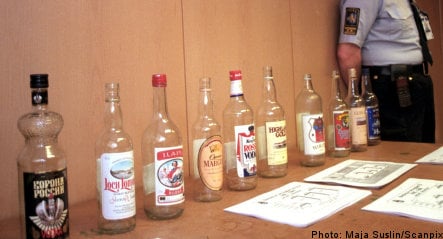 Mats Ramstedt, a researcher from the Centre for Social Research on Alcohol and Drugs (SoRAD), tells the Dagens Nyheter (DN) newspaper that the figures are unequivocal, but could be somewhat misleading.

SoRAD asked 1,500 randomly selected Swedes about their monthly alcohol consumption. Despite the fact that sales at state alcohol retailing monopoly Systembolaget are up, the study shows that Swedes’ alcohol consumption hasn’t risen accordingly.

The researchers therefore conclude that what has dropped is the amount of illegal alcohol obtained through smuggling.

Alcohol smuggling is reported to have fallen by 66 percent, while the smuggling of beer is down 16 percent.

Wine smuggling, on the other hand, has gone up by 2 percent during the survey period.

Potential explanations for Swedes’ apparently dwindling appetite for misbegotten booze include higher petrol prices, which make it less profitable to travel to other countries in order to buy alcohol, and that the risk of getting caught and charged has also increased.

Swedish Customs reports, however, that its agents haven’t noticed a marked drop in alcohol smuggling.