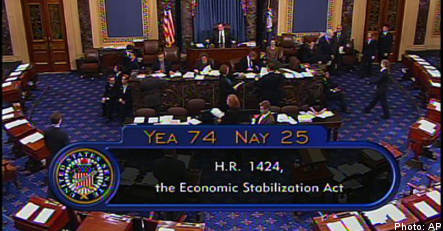 “We’ve taken an important step forward, but it’s not over yet,” said Robert Bergqvist, head economist at SEB bank, to the TT news agency following the vote.

“We’ll have to wait for the House of Representatives, but it’s hard to believe that they would say no to this.”

The House’s rejection of a previous bailout package left a lingering uncertainty with economic analysts around the world.

The Senate was seen as a smaller hurdle for the projected $700 billion rescue package, and the body had been expected to pass the bill.

“Uncertainty remains,” said Bergqvist, who pointed to a weak start to trading on Asian stock exchanges following the Senate’s vote.

But Bergqvist added that people should not underestimate the importance of the Senate giving its approval to the bill, as a no vote would have only deepened concern about the future of financial markets around the world.

“This was a necessary step. We have to solve the problems in the US, and it’s only the American’s themselves who can solve it, so this piece of the puzzle has to be in place,” he said.

Torbjörn Isaksson, head analyst with the Nordea bank told TT that it’s now time for the other house of Congress to act.

“[Senate approval] was generally expected, so to speak, and now there’s more pressure on the House of Representatives,” said Isaksson, who also provided his own analysis of why stocks had opened lower in Asia.

“It shows that [passage] was expected for the most part. It also shows that concerns about the economy are even stronger, especially when considering the drop in purchasing indexes we saw around the world [on Wednesday],” he said.

Isaksson doesn’t except a strong reaction to the Senate vote in Sweden, as the negative economic numbers had been released before the stock exchange closed on Wednesday, and the vote is only one of two steps needed to get the bailout bill through Congress.

“The big test will be the vote in the House of Representatives,” he said.

Bergqvist also cautioned against being too optimistic about the speed with which the US plan may become reality, emphasizing that the political process takes time.

Even if the US bailout becomes a reality, he said, global economic conditions won’t change overnight.

There are other issues at play which can’t necessarily be solved by interest rate adjustments or injections of public money.

“There’s a risk of there being a general disappointment. ‘Now we’ve got this in place, now all our problems are solved.’ But I think that is a little naïve,” he said.

BANKS
Brits in Sweden: Have you been affected by closures of UK bank accounts?
Url copied to clipboard!